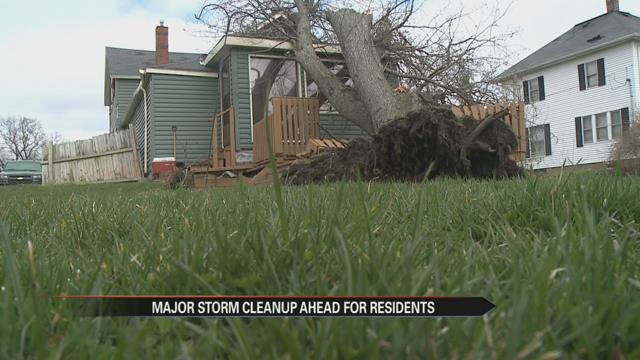 As residents throughout Edwardsburg clean up after Thursday’s severe weather, the National Weather Service has confirmed an EF-0 tornado passed through the Michigan village.

“I was terrified!” Cindi Seastrom said. “I really was. I kind of missed it. I didn’t know anything had happened.”

But a phone call at work let Seastrom know that her home fell directly in the path of the tornado that blew through Edwardsburg Thursday afternoon.

“You can see that, and that broke, come right through the roof a little bit and cracked the walls in the house,” Seastrom said, as she pointed to the destroyed chimney lying on her roof.

Along with snapping her chimney in half, the tornado severed a giant hickory tree in Seastrom’s backyard, leaving it inches from her home. The high winds also blew apart her deck.

“I think that’s a piece of it,” Seastrom said, referring to part of her deck that blew into the side of her neighbor’s house.

The damage from the tornado was visible throughout Edwardsburg Friday, as private contractors began hacking away at the dozens of trees that had toppled over.

“It was like a bomb hit,” Terry Eldridge said.

That’s how Eldridge described coming home to severe damage to his home, which is right next to Seastrom’s.

His home has been condemned until the damage – a large tree uprooted and crashed into his deck and the back section of his house – can be assessed.

But because of the holiday weekend, many throughout Edwardsburg are left waiting until Monday to find out just how bad things really are.

“I won’t know anything til the insurance people have been here,” Seastrom said. “I don’t know what to do.”

Like Eldridge’s house, Seastrom had no power or gas Friday afternoon.

She was told she could stay in her house to take care of her two dogs, but she’s confined to certain rooms that don’t risk collapsing under the weight of the broken chimney up above.

“It was pretty cold last night,” Seastrom said. “I hung blankets up and me and the dogs are staying in the kitchen. I’ve got a little space heater; I run an extension cord from the neighbor’s house.”

Resident said the tornado lasted only seconds, but the damage has left a lasting impact.

“It’s just now clean up and start over,” Seastrom said.

According to the National Weather Service, the tornado had winds that peaked at 75 mph. It formed at 3:14 p.m. 1.1 miles west of Edwardsburg and traveled 1.4 miles.