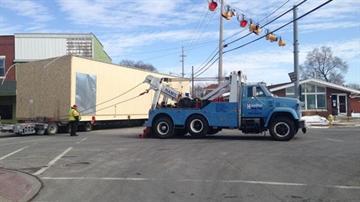 NORTH LIBERTY, Ind. -- A tractor trailer got stuck and closed down several roads in North Liberty Friday afternoon. The roads were closed down for several hours.

The tractor trailer got stuck around noon.

"The trailer was attempting to turn off 23 eastbound on 4. It was unable to make the turn without running into either store on either side of the street so at that time we contacted a towing company," said Mike Sawdon, Town Marshall at North Liberty Police.

Police say it was just an inconvenience for other drivers.