Trail of Courage teaches Indiana's past with living history festival 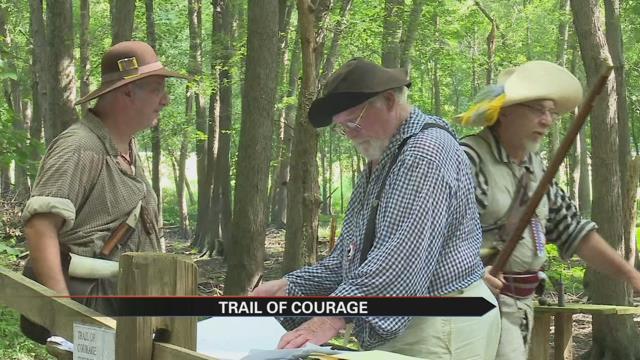 Fulton County was transported back in time on September 17 and 18 when the county's historical society launched its 41st annual Trail of Courage history festival.

1,000 volunteers re-enacted life in the 1830s on 35 acres of land, with food, crafts, music, dances, and live demonstrations.

But this wasn't just for fun and games. Shirley Willard is the former president of Fulton County's Historical Society.  She said the festival shows "our history here, and we want that history preserved."

Willard has perfect attendance, having attended all 41 of past year's festivals.  The Trail of Courage is a reminder of frontier life in Indiana and commemorates the Trail of Death that drove Native Americans out of Rochester.  And Willard says that's what it's all about.

Volunteer Range Officer Earl Whittaker agrees.  He's been a part of the Trail for 21 years, and believes it's good for the community.

"It helps us teach the young kids the history of the area," he says.

That's his favorite part. "I like talking to them," Willard says. " Explaining what's going on - that's my job."

For Willard, the trail is a part of her legacy.  Just like the history that the festival recreates.

"I guess G-d put it in my heart that this needed to be done," she says. "I never knew why, but I felt drawn to this.  This is what my life's work has been."