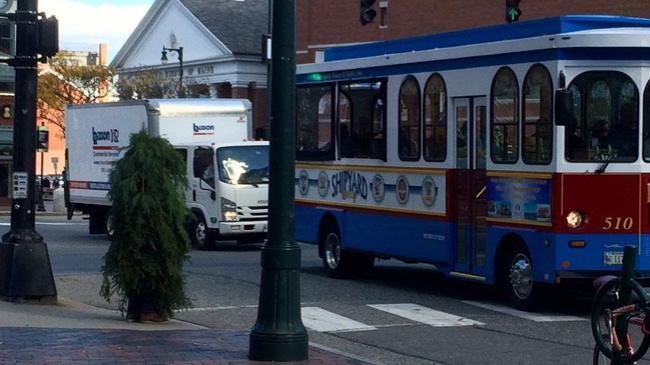 Ok, it wasn't really a tree, CNN affiliate WGME reported. It was a man dressed as a tree.

The tree, or um, man who was arrested said he stood in the middle of a downtown intersection as a kind of performance art. Asher Woodworth wanted to see how he could impact "people's natural choreography."

If by that he meant to get a lot of people to take pictures and videos of him, he succeeded.

Well, police weren't impressed: he was charged with obstructing a public way.

A Twitter user named "TVTeddy" posted video of Woodworth's initial chat with the police, where they warned him to stay out of the streets. Later, when the tree ended back out in the intersection, they moved in and arrested him.

TV Teddy provided an alternative theory for the stunt, saying the man was studying the city's traffic patterns. The rest of Twitter, of course, had its own takes:

Ramzinohra01 theorized that the cops would plant something on the tree.

But buzzbibby took a racial angle, say if the tree were a tree of color, it probably would have been cut down.

Thankfully crosslands68 took the more hopeful route, saying that if Woodworth identified as a tree, that was all right with him.