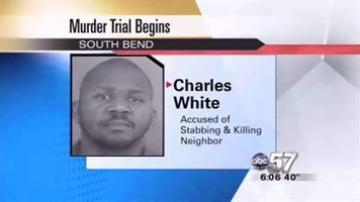 SOUTH BEND, Ind. -- The trial begins for a South Bend man accused of stabbing his neighbor to death!

Right now, he is behind bars at the St. Joseph County Jail.

Police said the two got into a fight, and White stabbed Weathers several times in the stairwell.

Metro Homicide officials said Weathers tried to run, but he could not get away.

His body was found in an alley behind the house.

As of late Monday afternoon, the jury was still being seated.