Trio charged in Indy home explosion due in court 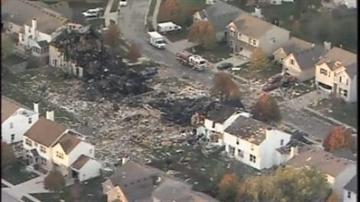 INDIANAPOLIS -- Three people arrested in connection with a deadly home explosion in Indianapolis are due in court Monday.

Monserrate Shirley and Mark Leonard, the couple that lived in the home at the center of the explosion were arrested on Friday.

They were charged with murder and arson. Leonard's brother is also facing charges.

Two people were killed in the blast.