Tropical Storm Emily weakens over Florida, could strengthen over Atlantic 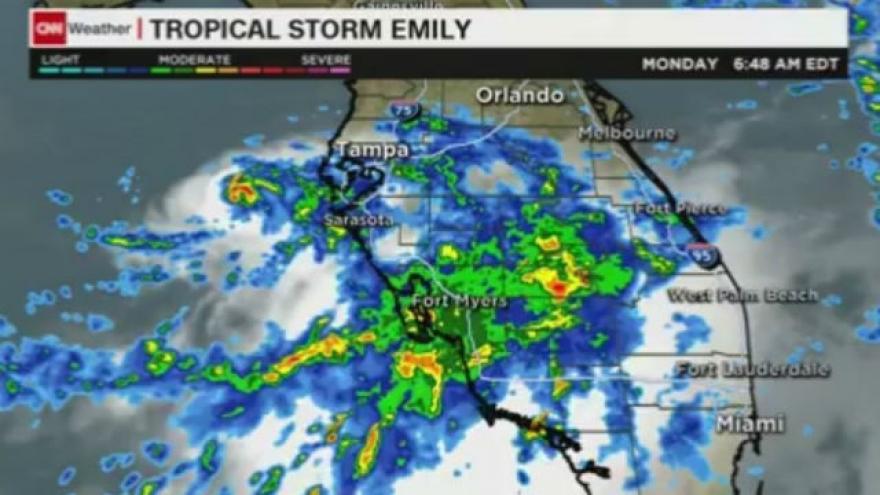 By Joe Sterling and Jessica Suerth

(CNN) -- Tropical Storm Emily was downgraded to a depression Monday night, but forecasters say they expect the storm to gain strength and be reclassified as a tropical storm as it moves away from Florida over the Atlantic.

The storm landed on Anna Maria Island, an island off Florida's west coast near Bradenton, around 10:45 a.m. Monday. It brought winds of 45 mph and several inches of rain.

Gov. Rick Scott declared a state of emergency for 31 counties in southern and central Florida.

"While it is positive news that this tropical storm has been downgraded to a tropical depression, we must remain vigilant," Scott said in a statement Monday night as he cautioned drivers to avoid standing water left from heavy rains.

Forecasters said the center of the storm would move offshore over the Atlantic early Tuesday, and it is expected to regain tropical storm strength over ocean water.

According to data from Scott's office, 7,868 residents were still without power as of Monday night.

At the height of the storm, about 18,000 residents were without power, Scott said.

Despite the storm's downgrade, forecasters said residents in central and eastern Florida would see rainfall into Tuesday before weather returns to normal later in the day.

Emily dumped nearly 4 inches of rain in Sarasota, less than 2 inches in Naples and less than an inch in Miami.

In some isolated areas, such as the town of Valrico, east of Tampa, as much as 8 inches of rain fell in 48 hours, according to the National Weather Service.

In a statement released Monday, Scott urged residents to be prepared for hurricane season. The governor and Florida Division of Emergency Management Director Bryan Koon advised people to visit the FL GetAPlan.com website for resources and information.

"While this storm developed quickly overnight and will swiftly move across our state, storms can always develop rapidly and that is why it is so important to be prepared at the start of hurricane season," Scott said.