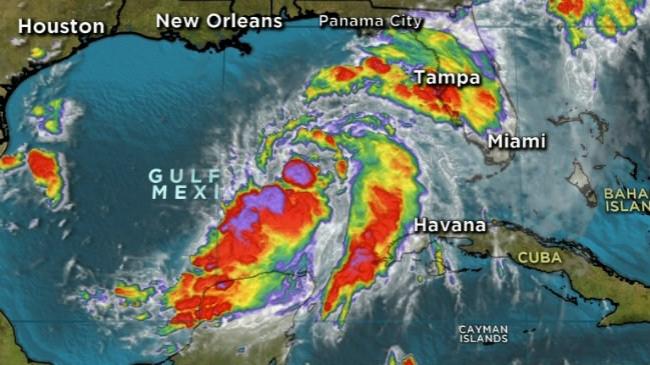 (CNN) -- Tropical Storm Hermine marched across the Gulf of Mexico on Wednesday, with the National Hurricane Center predicting the storm will make landfall late Thursday or early Friday in the Florida Panhandle.

Residents along the Gulf Coast, pounded by heavy rain on Wednesday in advance of the storm, should be prepared for flooding and storm surges, as Hermine could bring up to 10 inches of rain, or 20 inches in isolated areas, the hurricane center said.

"It is crucial that every Floridian has a plan in place to ensure their families, homes and businesses are fully prepared," Gov. Rick Scott said in declaring the state of emergency for 42 of the state's counties.

Hermine is moving north-northeast at 8 mph but is expected to take a more northeastern track later Wednesday. It will probably make landfall in the Florida panhandle's "Big Bend" region, the hurricane center said.

Forecasts call for the storm to cross Florida before continuing northeast along the coasts of Georgia and the Carolinas.

Hermine could become a hurricane, the center said. A hurricane watch was in effect for the area between Anclote River, near Tampa, and Destin.

If it becomes a hurricane -- that is, if its sustained wind speeds top 74 mph -- it would be the first hurricane to make landfall in Florida since Wilma in 2005.

Catfish in the front yard

Some places, like Marco Island, were already dealing with high water in the streets, with residents saying they caught catfish in their flooded front yards, CNN affiliate WZVN reported.

"Craziest thing I ever saw," Darrin Palumbo told the station. "We were driving home from school, and the road was flipping around and moving. We finally figured out there was a bunch of catfish flopping around the road."

The town of Largo in Pinellas County experienced heavy flooding, with six families having to move out after water invaded their apartments, CNN affiliate WFTS reported.

People in Spring Hill, in Pasco County, are still recovering from flooding a few months ago, WFTS reported. That flood made the road they depend on impassable, Misty Hill said.

Residents have been sharing images of high water running through neighborhoods.

In one video, a man is seen paddleboarding down a street. A photo from Holmes Beach showed a woman floating on an air mattress in her driveway.

In Anna Maria Beach, cars were splashing as they drove through hubcap-high water in the street.

Crawfordville Elementary School will open as a shelter at 5 p.m., the county said.

Ten offshore oil and gas platforms in the Gulf of Mexico were also evacuated in anticipation of the storm.

Parts of Florida are already feeling Hermine's effects. In Pinellas County, the southwest county that is home to Clearwater and St. Petersburg, schools have already been closed for Thursday and a flood warning is in effect. Nearby Manatee County also closed schools.

In nearby Tampa, the Buccaneers' final preseason NFL game against the Washington Redskins was moved from Thursday night to Wednesday in expectation of the storm.

The National Weather Service has issued a new online product to help people prepare for the storm.

The storm surge watch/warning graphic highlights spots with the highest risk for "life-threatening inundation from storm surge," the service said.

CNN's Brandon Miller and Mayra Cuevas contributed to this report.