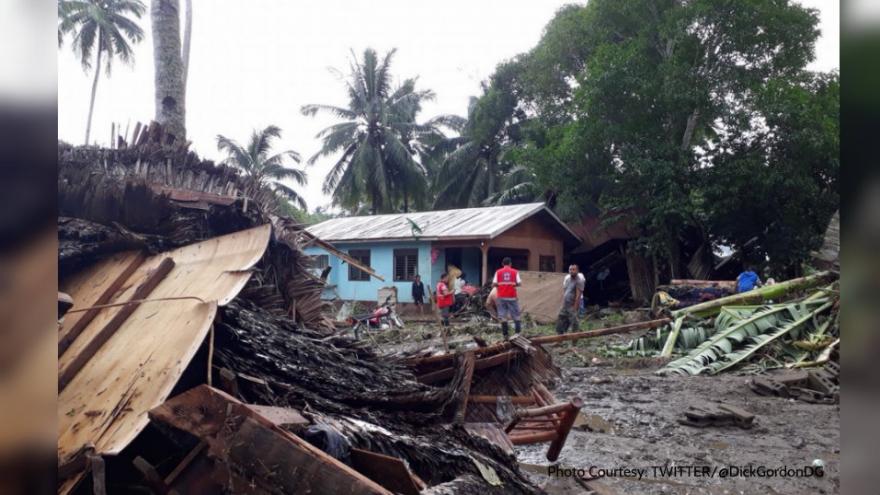 (CNN) -- A tropical storm unleashed devastating floods and landslides in southern Philippines, killing at least 123 as it swept away residents and left communities buried in mud, authorities said.

Tropical Storm Tembin slammed into another set of Philippine islands late Saturday, hours after it battered the southern island of Mindanao.

Officials have given conflicting death tolls since the storm ravaged towns and displaced thousands.

At least 123 people have been killed and 159 are missing, spokeswoman Mina Marasigan of the Philippines' national disaster management agency said Sunday.

Earlier, the CEO of the Philippine Red Cross tweeted that 156 people have died.

Tembin, also known as Vinta in the Philippines, made a second landfall Saturday night over Balabac Island, at the southern tip of Palawan province.

Tembin initially struck Friday, dropping more than 140 millimeters (5.5 inches) of rain in some parts of Mindanao, overwhelming artificial dams and sending floodwaters from mountainous areas down to communities below.

The Mindanao province of Lanao del Norte was especially hard-hit. Video there showed people holding onto ropes Friday as they tried to cross a rushing, muddy river of floodwater that had crashed through a community.

The storm has displaced more than 70,000 people in southern Philippines, 50,000 of whom were staying in shelters, the International Federation of Red Cross and Red Crescent Societies said Saturday.

By early Sunday, the center of the storm was 290 kilometers south of Pagasa Island, according to the Philippine Atmospheric Geophysical Astronomical Services Administration. The agency referred to it as Typhoon Vinta early Sunday.

The storm system will bring moderate to heavy rain to Palawan province's southern end -- a largely rural area with vast forests and palm oil plantations. Light to heavy rains also could continue to fall in the central and southern Philippines through Sunday.

Tembin is forecast to head out over the South China Sea, potentially getting close to Vietnam's southeastern coast by Monday.

4-year-old among those killed

Most of the deaths resulting from Tembin on Mindanao were in Lanao del Norte province, with additional ones elsewhere on the island, including Payao and Lanao del Sur.

"(When) these artificial dams were not able to withstand the pressure anymore, flash floods came down from the mountains," said Mina Marasigan, spokeswoman for the Philippines National Disaster Risk Reduction and Management Council.

Among the dead were a 4-year-old who was trapped in a landslide in Payao and a prisoner who was killed when the roof of a jail collapsed from strong winds and rains in Butuan City, CNN Philippines reported, citing the Philippine Red Cross.