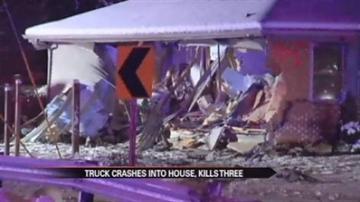 EVANSVILLE, Ind. -- Three people are dead after a truck crashed into a house early Sunday morning in Evansville.

Police say 75-year-old Homer Meriwether and his 74-year-old wife Lela were killed when a truck crashed into their bedroom just before 2:30 p.m.

The driver, 24-year-old Thomas Hodgson also died at the scene.

Evansville Police are still investigating what caused the wreck.

Neighbors say it's a dangerous stretch of road that's been the scene of several accidents in the past.