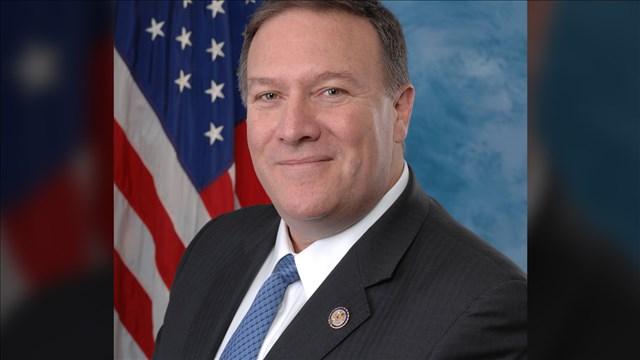 "He has served our country with honor and spent his life fighting for the security of our citizens," Trump said Friday in a statement. "He will be a brilliant and unrelenting leader for our intelligence community to ensure the safety of Americans and our allies."

Pompeo announced Friday evening that he accepted the nomination, saying in a statement that he's "honored" and "humbled" by the president-elect's decision.

"This was a difficult decision. I have genuinely loved representing the people of Kansas in Congress -- working to make our community stronger and more prosperous," he wrote. "But ultimately the opportunity to lead the world's finest intelligence warriors, who labor tirelessly to keep this nation and Kansas safe, is a call to service I cannot ignore."

Pompeo has made his mark during his three terms in the House as a conservative voice on national security issues.

Speaker John Boehner viewed him as a rising star and tapped him to serve on the House Intelligence Committee and the Select Committee on Benghazi, both posts that usually go to more senior members. He also got a coveted seat on the Energy and Commerce panel and has proposed measures regarding energy production.

He staked a tougher line on Democratic presidential nominee Hillary Clinton than some other Republicans. Pompeo was one of a handful of conservatives who argued House Benghazi committee chairman Trey Gowdy did not go far enough in his report on Clinton earlier this year.

The Kansas lawmaker was a strong critic of the Iran nuclear deal and introduced several bills focused on security concerns about the Iranian government, including one bill raising concerns about the cooperation between Russia and Iran.

Pompeo backed Sen. Marco Rubio in the primary and criticized Trump from the right, but later developed a relationship with the Trump campaign. The campaign called him every once in a while to get advice on key national security issues, and during the vice presidential debate, Pompeo was a surrogate for Vice President-elect Mike Pence.

After the elections, Pompeo met with Trump, including earlier this week in New York where they talked about the job. Trump seems to have trusted his gut that Pompeo was best suited for the role.

Pompeo met with House Speaker Paul Ryan and Pence, the leader of Trump's transition, at the Capitol Thursday. He declined to comment on their meeting as he left.

The Kansas Republican becomes the first member of the House tapped by Trump, although Republican Reps. Jeb Hensarling and Tom Price both met with the President-elect this week and are being mentioned for other Cabinet positions.

One of Pompeo's close friends and mentors on Capitol Hill was Michigan Rep. Mike Rogers, the former chairman of the House Intelligence panel. Rogers, who some considered as a possible pick for the CIA post, left the Trump transition team earlier this week after the President-elect removed those on the committee with ties to New Jersey Gov. Chris Christie.

Democrats were quick to paint Pompeo as a member who touted the party line, a quality they worried about for a nominee for the top intelligence post.

"The Department of Justice and the CIA need nonpartisan leaders the American people can trust implicitly. Yet Congressman Mike Pompeo, a leading cheerleader of the Benghazi witch hunt, is now being asked to fill one of the most serious and sober national security positions there is," House Democratic Leader Nancy Pelosi said in a statement Friday.

Before joining Congress, Pompeo graduated first in his class from the US Military Academy at West Point. Pompeo was a classmate of Sen. Ted Cruz's at Harvard Law School, where he was an editor of the Harvard Law Review -- although he declined to support Cruz in the Republican primaries.

The selection of Pompeo rounds out a trio of national security picks Trump has made -- including Sen. Jeff Sessions for attorney general and retired Army Lt. Gen. Michael Flynn for national security advisor that were announced Friday.

The National Republican Senatorial Committee hired a retired FBI agent to dig up dirt against him. And numerous senators, as well as Speaker Paul Ryan, urged him to stay out. Pompeo ultimately released a scathing statement when he decided not to run.

Democratic groups blasted Pompeo's selection Friday. They cited Pompeo's allegations in 2013 that Muslim Americans do not speak out enough against terror attacks and could therefore be "potentially complicit" in those attacks.

"That mindset is horribly wrong when it comes to views of civil rights and civil liberties of Muslim Americans. Statements like those also further propaganda of radical terrorists, who, right now, are celebrating the election of Donald Trump, because they believe it will bring about a war of religions," said Jon Soltz, chairman of the liberal group VoteVets.org. "This puts us all in extreme danger, but especially our troops, serving overseas."