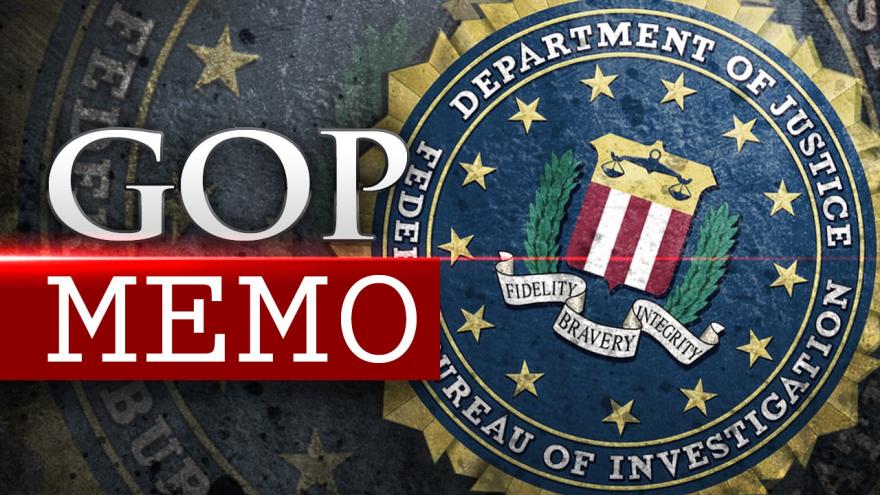 White House spokesman Raj Shah said the document had previously been transmitted to the minority and majority members in the House Intelligence Committee. The document was also sent to House Speaker Paul Ryan's office, Shah said.

Speaking in the Oval Office, President Donald Trump implied the memo revealed political bias at the FBI. He said he believed the purported bias was a "disgrace" and said certain people should be "ashamed of themselves."

The extraordinary decision to release the classified four-page memo with a never-before-used House Intelligence Committee rule would escalate the partisan fight over the investigations into Russian election meddling and possible collusion. This will likely have major repercussions for the relationship between the Justice Department and Capitol Hill.

The memo's release would also threaten to further fracture the frayed relationship between the President and his Justice Department and intelligence community, both of which opposed the release of the document, which is based on classified intelligence. The FBI issued a rare public warning on Wednesday that the memo omits key information that could impact its veracity.

The memo, spearheaded by House Intelligence Chairman Devin Nunes, alleges that the FBI used the opposition research dossier on Trump and Russia written by ex-British intelligence agent Christopher Steele to secure a FISA surveillance warrant on former Trump foreign policy adviser Carter Page without disclosing that the dossier was funded in part by Democratic sources.

In a statement earlier this week, Nunes said, "It's clear that top officials used unverified information in a court document to fuel a counter-intelligence investigation during an American political campaign."

The dossier alleges that Page met senior Russian officials as an emissary of the Trump campaign and discussed quid-pro-quo deals relating to sanctions, business opportunities and Russia's interference in the election. After Page took a trip to Russia in July 2016, the FBI grew concerned that he had been compromised by Russian operatives, US officials briefed on the matter told CNN.

Page says he never cut any political deals with the Kremlin and says there was nothing illegal in his interactions with Russian officials.

The release comes despite a lobbying effort from senior officials at the FBI and Justice Department , who argued that the memo contained inaccuracies.