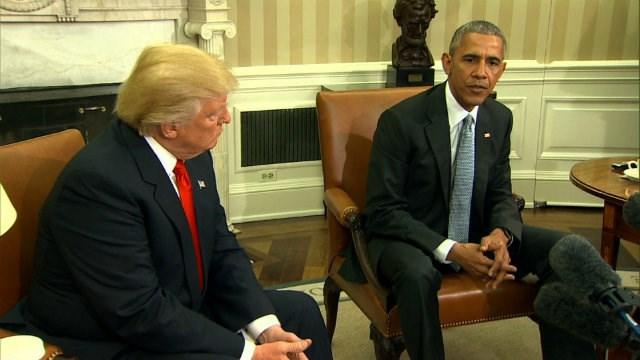 WASHINGTON (CNN) -- President Barack Obama welcomed President-elect Donald Trump to the White House Thursday, as both men put past antagonisms aside in a time-honored ritual epitomizing the peaceful transfer of political power.

Three days after mocking Trump as unfit to control the codes needed to launch nuclear weapons, Obama told his successor that he wanted him to succeed and would do everything he could to ensure a smooth transition.

Trump, who spent years pursuing Obama over false claims he is not a natural-born American and accused him of being the founder of ISIS on the campaign trail, called Obama a "very good man" and said he would seek his counsel in future.

The extraordinary meeting was a reflection of the swift and sudden change in the political mood between the frenzied last days of an election campaign and the reality of government and the transition of power between two administrations that follows.

"My No. 1 priority in the next two months is to try to facilitate a transition that ensures our President-elect is successful," Obama said.

Obama told Trump: "If you succeed, the country succeeds," as the two men sat in high-backed chairs in front of the fireplace in the Oval Office.

Trump thanked Obama for the meeting which he said had originally been scheduled for 10 minutes and went on for 90.

"Mr. President, it was a great honor being with you and I look forward to being with you many, many more times," Trump said, adding that he and Obama had spoken about some wonderful and difficult things and "some high-flying assets."

It was not immediately clear what he meant.

The President-elect also said he would seek "counsel" from Obama.

As the pool of reporters were led out, Trump told them several times that Obama was "a very good man."

It comes with many Americans, especially Democrats and liberals, still in disbelief and shock at Trump's victory over Hillary Clinton on Tuesday, after the most vicious and unconventional campaign in modern history.

The meeting, and Trump's stern demeanor, also underscored how the heavy burden of the presidency begins to settle on the shoulders of a President-elect. In Trump's case, that process will be especially challenging giving that he will be the first president elected with not political, diplomatic or military executive experience.

Republican National Committee chairman Reince Preibus, who is being mentioned as a possible chief of staff in Trump's White House, told CNN's Jake Tapper that Americans would appreciate Trump's demeanor in Washington.

"I hope that everyone has seen sort of this presidential Donald Trump that we knew all along was up to the task and I think is going to make us all proud," Preibus said.

It is also clear that Obama's determination to facilitate a smooth and effective transition, like the one he was provided by outgoing President George W. Bush, is a reflection of his desire not to permit any animosity towards Trump from he or his staff that would detract from his own legacy in the final days of his presidency.

CNN's Jim Acosta said one senior White House official responded with a single word -- "unbelievable" when asked about Trump's comment that he would seek "counsel" from the current President. The official said no one in the White House had changed their mind about Trump, despite their commitment to a smooth political transition.

Still, White House spokesman Josh Earnest said that given the history between them, the meeting between Obama and Trump in which they were alone in the Oval Office, was "a little less awkward" than might be expected and they did not recreate some kind of presidential debate during the talks over their stark political differences.

Trump's first visit to Washington began as the President-elect began around 10:30 a.m. when the plane emblazoned with his last name landed at Reagan National Airport, marking a new beginning for America.

Earnest said that Obama briefed Trump on his last foreign trip -- to Greece, Germany and Peru next week -- and that the President left the talks with "renewed confidence" that Trump was committed to a smooth transition.

Acrimony on the campaign trail

The symbolism of a President and a President-elect being together is always powerful. But it was especially notable on Thursday given the bitter history between them.

Throughout Obama's presidency, Trump persistently sought to undermine the legitimacy of the nation's first African-American presidency by questioning his citizenship and his Christian faith.

"He doesn't have a birth certificate. He may have one, but there's something on that, maybe religion, maybe it says he is a Muslim," Trump told Fox News in 2011. "I don't know. Maybe he doesn't want that."

The campaign was considered a racial attack by many people close to Obama.

When Obama, attempting to put a stop to the falsehood, released his "long-form" birth certificate from Hawaii in April 2011, Trump continued to claim it was somehow faked.

It took until September 2016 -- two months before a presidential election in which he was already the Republican Party's nominee -- for Trump to admit the reality that Obama was, indeed, born in the United States.

And when he did so, it was only in a brief statement with no explanation of why he'd changed his long-held belief, aside from saying in interviews later that he wanted to get the question off the table in the heat of the campaign.

Obama has directed his own barbs at Trump, too.

At the 2011 White House Correspondents Dinner, with Trump in the audience, Obama mocked Trump's birtherism, in a biting attack that crossed the line between humor and sarcasm into overt personal hostility.

"He can finally get back to focusing on the issues that matter -- like, did we fake the moon landing? What really happened in Roswell? And where are Biggie and Tupac?" Obama said of Trump.

He also cast Trump as incompetent and unhinged on the campaign trail, citing a New York Times report that Trump's staff had taken his Twitter account away from him after a 3 a.m. rant about former Miss Universe Alicia Machado.

"They had so little confidence in his self-control, they said, 'We are just going to take away your Twitter.' Now, if somebody can't handle a Twitter account, they can't handle the nuclear codes," Obama said on Sunday in Florida, and made similar comments in New Hampshire on election eve.