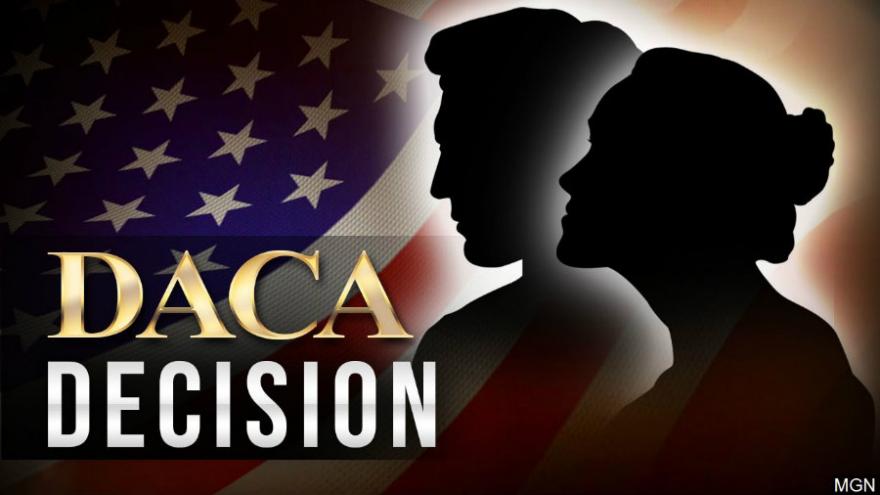 (CNN) -- President Donald Trump is moving closer to a deal with Democrats that would protect hundreds of thousands of young undocumented immigrants from deportation.

But the parameters of any deal, including a potential pathway to citizenship for Deferred Action for Childhood Arrivals (DACA) participants and funding for his marquee campaign promise of a wall along the US-Mexico border are up in the air as the White House and Congress grapple with the impact of a Wednesday dinner between Trump and Democratic leaders.

The bombshell developments, which were first announced by Democratic leaders Sen. Chuck Schumer and Rep. Nancy Pelosi and reiterated by Trump himself Thursday morning, were met with immediate outrage from conservatives and put pressure on the President's Republican allies in Congress.

A deal would be the second major Trump-Pelosi-Schumer pact this month, following the agreement on the debt ceiling and government spending.

Trump said House Speaker Paul Ryan and Senate Majority Leader Mitch McConnell are "very much on board" with plans to make the DACA program -- which protected nearly 800,000 individuals who were brought to the United States illegally as children from deportation -- permanent.

The Trump administration announced last week it would give Congress six months to pass legislation preserving those provisions before the program was terminated.

The President also has indicated that funding for the wall -- a signature campaign promise -- would be part of an agreement, but it is unclear when that would happen or if it would be a prerequisite for a DACA deal.

Trump, in Florida to view damage from Hurricane Irma, said he is not looking at "citizenship" or "amnesty" but that they are "looking at allowing people to stay here."

He added: "If we don't have the wall, we are doing nothing."

But earlier Thursday, Trump told reporters as he departed the White House for Florida that "the wall will come later."

And his comments on citizenship came only minutes after Lindsay Walters, a White House spokesperson, told reporters on Air Force One that Trump would talk about an immigration reform bill that "could include legal citizenship over a period of time."

Trump also defended on Twitter the undocumented immigrants protected under DACA, calling them "good, educated and accomplished young people" who "have been in our country for many years through no fault of their own."

Wall or no wall? And when?

The two Democratic leaders announced that following a dinner at the White House, they had "agreed to enshrine the protections of DACA into law quickly, and to work out a package of border security, excluding the wall, that's acceptable to both sides."

Trump insisted on Twitter Thursday morning that "no deal was made" on DACA, and Schumer and Pelosi later issued a statement clarifying that what was agreed upon was Trump supporting congressional actions to put DACA protections into law.

"What remains to be negotiated are the details of border security, with a mutual goal of finalizing all details as soon as possible," the statement said. "While both sides agreed that the wall would not be any part of this agreement, the President made clear he intends to pursue it at a later time, and we made clear we would continue to oppose it."

"The wall to me is vital," Trump said. "If I don't get the wall then we will become the obstruction."

He added of Democrats, "at some point they're gonna have to (fund the wall). They cannot obstruct the wall."

"Whether it's in the budget or another vehicle -- they need to make sure the wall is funded or we're not doing any deals," Trump said.

But earlier Thursday, Trump told reporters as he departed the White House for Florida that "the wall will come later," making it unclear when an agreement would have to be reached.

At the White House, Trump told reporters that progress continues on the wall.

"We're right now renovating large sections of wall," he said. "Making it brand new. We're doing a lot of renovations we're building four different samples of the wall to see which one we're going to choose. The wall is going to be built -- it will be funded a little bit later."

If a deal on some immigration and border issues happens, it would be the second major agreement between Trump, Schumer and Pelosi this month following their pact last week to raise the debt ceiling and extend government funding into December that left the GOP and some of Trump's closest allies flabbergasted.

The bipartisan DREAM Act -- a more comprehensive immigration bill that was proposed years ago but never passed -- would be part of the proposed arrangement, a person briefed on the meeting said Wednesday night.

Pelosi briefed her whip team Thursday morning on the DACA talks, according to two Democrats who attended the weekly meeting.

"She said that they agreed to work out a solution," Rep. Mike Thompson, D-California, told CNN. "I think we are well on our way.

Another Democratic source in the meeting told CNN that there was "only positive reaction" from those in the room.

Schumer and Pelosi's statement on Wednesday quickly sent shockwaves through Trump's conservative base, as his hardline stance on immigration was a core tenet of his campaign.

"Unbelievable! Amnesty is a pardon for immigration law breakers coupled with the reward of the objective of their crime," tweeted Rep. Steve King, R-Iowa.

He continued: "@RealDonaldTrump If AP is correct, Trump base is blown up, destroyed, irreparable, and disillusioned beyond repair. No promise is credible."

Conservative commentator Laura Ingraham tweeted that "Dems' 'Border security' pledge is MEANINGLESS." Staunch Trump ally Sean Hannity added, "Weak R's have betrayed voters. @POTUS needs to stay the course and keep his promises or it's over! Pelosi and Schumer can never be trusted."

Amid the criticism Wednesday night, Trump weighed in on tax reform and his former election rival, Hillary Clinton, waiting to respond to the reaction until Thursday morning.

Making a deal that finds a way to keep the individuals who benefit under DACA in the United States shows the challenge of striking bipartisan deals in Washington, and no agreement will move forward in Congress unless Ryan and McConnell agree on it.

Congressional Republican leaders were absent from Wednesday's dinner, which featured Chinese food and chocolate pie for dessert, sources said, and it was not immediately clear how they would handle such legislation on Capitol Hill.

The dinner took place the same day Ryan and House Majority Leader Kevin McCarthy met with Democratic leadership and representatives from groups in the Capitol.

There was significant trepidation among senior GOP aides before Wednesday night's dinner that Trump would make concessions to Democrats on DACA. Behind the scenes, Republican leadership has been crafting a plan and process to get address the issue while also getting the conference comfortable with the extent of the border security money and resources they planned on securing for any deal.

The primary reason for the silence from GOP leadership offices is they were trying to figure out what actually happened during the dinner.

"You apparently know more than we do," one senior GOP aide told CNN.