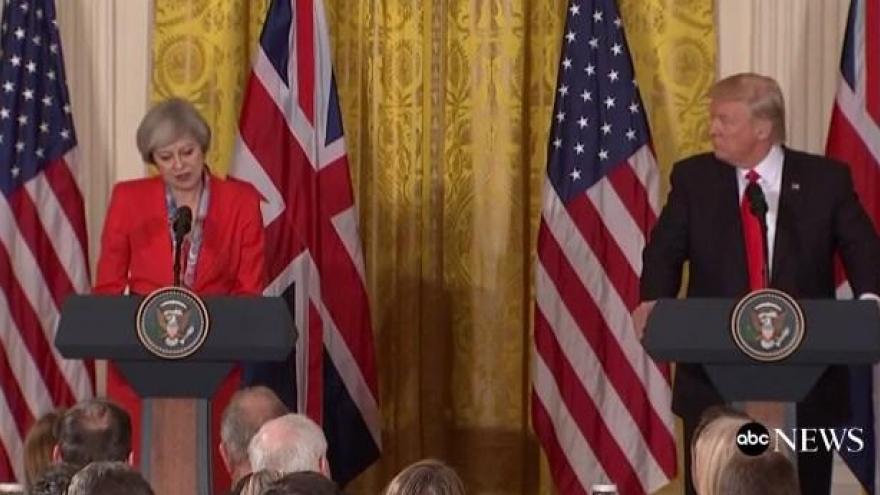 WASHINGTON (CNN) -- President Donald Trump used his first White House news conference Friday to say he is open to a warmer relationship with Russia and underscored his desire for a constructive bond with the United Kingdom, amid questions about the United States' role in the world community.

Trump indicated a willingness to warm ties to Moscow, and is due to speak with Russian President Vladimir Putin on Saturday.

"We'll see what happens," Trump said of the call. He said it was "too early" to discuss removing sanctions that were issued on Russia under his predecessor President Barack Obama.

The brief news conference in the White House East Room with British Prime Minister Theresa May capped a turbulently productive seven days in office for Trump.

Trump also described a "very, very friendly" call with Mexican President Enrique Peña Nieto on Friday, at the same time insisting he would maintain a tough stance on trade with the US neighbor.

"Mexico with the United States has out-negotiated us and beat us to a pulp through our past leaders," Trump said. "They have made us look foolish."

He said he would work to bolster a "soft and weak" border and prevent American jobs from moving across the border.

"We're no longer going to be the country that doesn't know what it's doing," Trump said.

Trump did not mention his proposed wall along the US-Mexico border, or the idea of Mexico funding the project, which led Peña Nieto to cancel his planned visit to Washington next week.

Relations between the US and the UK, however, remain strong, Trump said.

Trump hailed the "special relationship" between the US and the UK, saying the bond "has been one of the great forces of history."

"Our relationship has never been stronger," Trump said.

Trump said both he and May were adamant that governments "be responsive to everyday working people" and show respect for their citizens.

For Trump, the event was an opportunity to fully capitalize on his new office, trading the lobby of Trump Tower -- the site of his last fiery news conference -- for the iconic gold curtains and presidential podium in the East Room.

Vastly different in persona, the bombastic Trump and the more sober May will provide a juxtaposition of diplomatic approaches in their joint appearance. May and Trump both took office on a wave of populism, but deep differences remain between the pair. Trump's vow to revive torture practices, including waterboarding, could prove divisive for the two leaders.

Trump also said he would allow his Defense Secretary James Mattis to "override" him on torture, an issue where the two men fundamentally disagree.

"I don't necessarily agree, but I would tell you that he would override because I am giving him that power," Trump said. "I am going to rely on him."

Trump has in the past suggested that he would defer to Mattis, who is firmly opposed to reinstating torture, on the issue, but he appeared to go further Friday in closing the door on the issue.