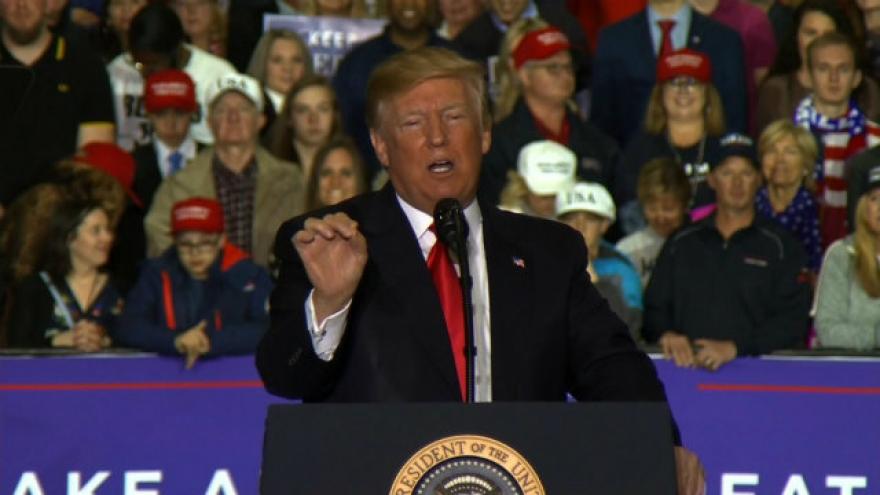 (CNN) -- President Donald Trump told supporters at a speech on Saturday that if Congress did not meet his funding demands for border security, he may support a government shutdown this fall.

Trump was speaking in Washington Township, Michigan, at the same time that the White House correspondents' dinner was taking place back in Washington, DC, with some lawmakers and current and former members of his administration in attendance. During his remarks, he alluded to the appropriations deadline at the end of September.

"We have to have borders, and we have to have them fast," he said. "And we need security. We need the wall. We're going to have it all. And again, that wall has started. We got 1.6 billion. We come up again on September 28th, and if we don't get border security, we'll have no choice. We'll close down the country because we need border security."

Despite his campaign pledge to make Mexico pay for his proposed wall on the US-Mexico border, Trump has demanded that Congress fund the project. Last month, he signed a bill that funds the government through September after expressing frustration with a spending package that included $1.6 billion for border security, but not the wall.

In his speech Saturday night, Trump railed against the Democratic Party on a range of issues, including immigration.

"A vote for a Democrat in November is a vote for open borders and crime," Trump said.

He continued, "The open border policies of the Democratic Party are not just wrong, they're dangerous, and they're in fact deadly. They're deadly."