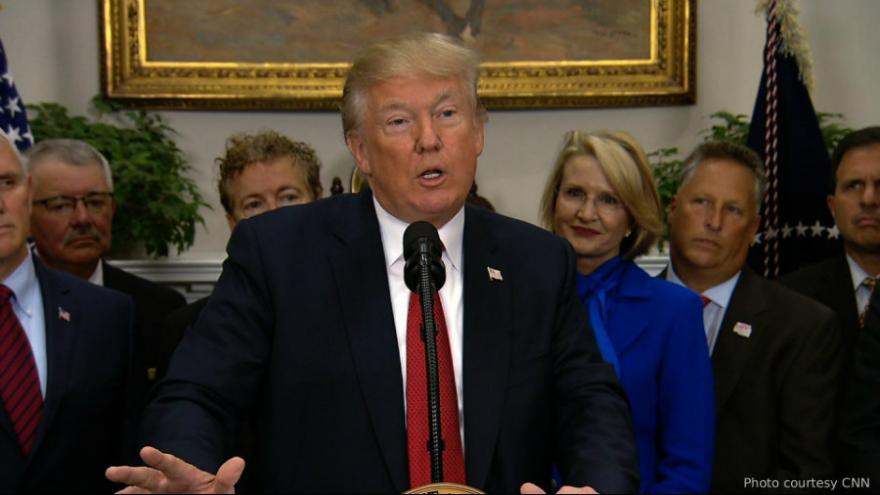 (CNN Money) -- President Trump finally made good on his promise to yank funding from a key set of Obamacare subsidies.

The administration announced late Thursday night that it would immediately stop supporting the cost-sharing subsidies that reimburse insurers for reducing the deductibles and co-pays of lower-income Obamacare enrollees. Trump has been paying the subsidies on a month-to-month basis, unnerving many insurers.

What does this mean for the nearly six million people who receive these subsidies? And what about the more than 10 million Americans enrolled in Obamacare?

The short answer: Insurers must continue providing these cost-sharing discounts -- even though they won't be paid for them. That's because the subsidies are required by the Affordable Care Act.

Many carriers already anticipated Trump would eliminate the funding and are hiking premiums substantially for 2018. Others, however, didn't do so. They may now try to raise rates or even pull out of the exchanges.

Enrollees who qualify for premium subsidies -- which are separate and unaffected -- won't have to pay much more, though they may need to switch plans to keep their rates steady. But middle class Americans who earn too much to get premium subsidies could get walloped by higher rates.

Also, Trump's move is expected to unleash multiple lawsuits from insurers, state regulators and consumer advocates seeking to force the administration to continue the payments.

For a more detailed answer, read on.

Only a few months ago, insurers warned that discontinuing the funding for cost-sharing subsidies could bring down Obamacare. They, along with governors, health care providers and lawmakers on both sides of the aisle, pressed Trump to continue making the payments to stabilize the individual market in the near term.

Now that the funding is terminated, insurers' reaction will vary, experts said. The move comes at a tough time, less than three weeks before open enrollment for 2018 begins. Rates are set and contracts for 2018 have been signed in most states.

"It introduces a lot of chaos, but this doesn't threaten its future," Larry Levitt, senior vice president at the Kaiser Family Foundation, said of the Affordable Care Act. "Those insurers that have built in [the end of the funding] are totally fine."

Insurers that assumed the cost-sharing subsidy payments would be discontinued requested an additional 2% to 23%, according to a Kaiser Family Foundation analysis published in August.

Carriers are levying the rate hikes in different ways. Some are spreading it out across all their plans, but others are limiting it to just silver-tier polices -- the plans eligible consumers must purchase to receive the cost-sharing subsidies. In California, for instance, insurers will levy a surcharge of up to 27% on silver-level plans.

Two insurers contacted by CNNMoney said the president's action will not alter their plans for 2018. Health Care Service Corporation and Medica both said they took into account the uncertainty surrounding the federal funding of the subsidies in their rates.

"The decision by President Trump to end CSR payments will not change Medica consumers' current health plans or change the options available to them in 2018," said Geoff Bartsh, a vice president at the insurer, which sells policies in five states. "Consumers who qualify can still purchase a plan with lower out-of-pocket costs. Our premiums for 2018 anticipated this action and were increased previously to account for it."

Medica decided not to offer Obamacare policies in North Dakota next year because state regulators would not allow the company to revise its requested premium increase to assume the subsidies would not be paid.

Related: The real reason Trump is so dead set on crushing Obamacare

Other carriers, however, did not build in a buffer in case Trump ended the payments. These insurers are in more of a pickle. Some may try to raise rates now, though this would have to be approved by regulators. Others may try to exercise a clause in their contracts that allows them to drop out if the subsidy funding disappears.

In Oregon, state regulators on Friday ordered insurers offering policies on the exchange to boost their silver plans premiums by 7.1% for 2018. This will make up for the $49 million in cost-sharing subsidy funding that they will lose.

"These rate increases are necessary to ensure the stability of the health insurance market," said Jean Straight, acting director of the state Department of Consumer and Business Services.

Also, Trump's abrupt withdrawal of the payments leaves all Obamacare insurers on the hook for the last three months of this year, which may spur them to sue. This comes to more than $1 billion, according to the National Association of Insurance Commissioners. The payments were expected to total $7 billion this year.

"These benefits help real people every day, and if they are ended, there will be real consequences," the lobbying groups said. "This action will make it harder for patients to access the care they need. Costs will go up and choices will be restricted."

The skyrocketing premiums will also hit taxpayers. Trump's move will actually cost the federal government an estimated $7.2 billion more next year because it will have to shell out more in premium subsidies to cover these higher rates, according to an Urban Institute analysis.

As for Obamacare enrollees, the impact also varies. More than eight in 10 are shielded from rate increases because they qualify for premium subsidies, which are not affected by Trump's move. Premium subsidies are advanced refundable tax credits.

Those who can't get premium subsidies could see substantial increases for 2018, which would come on top of big hikes levied for 2017. This would be particularly true if they select an insurer who raised rates across all their plans.

But unsubsidized consumers in some states could find a better deal if they shop for a bronze or gold plan offered by an insurer that loaded the rate increases into the silver policies. In Idaho, for instance, silver plan premiums will jump an average of 44%, but bronze plans are only going up 8% and gold plans 9%, on average.

Some enrollees could find they have fewer -- or even no choices of carriers -- on the exchanges, depending on where they live. That could happen if insurers who didn't price in the end of the subsidy funding opt to terminate their contracts. As it stands now, roughly half of counties will have only only option on their exchanges in 2018.

Trump's decision, however, may not be the last word on the funding of the cost-sharing subsidies.

"So what happens now? Lawsuits, lawsuits, and more lawsuits," Nicholas Bagley, an assistant professor of law at the University of Michigan, wrote in a blog post Thursday night.

Insurers and state officials could sue the Trump administration for ending the payments. New York Attorney General Eric Schneiderman, who is part of a coalition defending the subsidies, announced Friday that a group of states filed a lawsuit to force the president to continue the funding.

The cost-sharing subsidies have been at the center of a legal battle that dates back to 2014, when the House of Representatives filed a lawsuit against then-Health Secretary Sylvia Burwell. GOP lawmakers argued the payments were illegal because Congress never appropriated the money. A district court judge last year ruled in favor of the House, but stayed her decision. The Obama administration filed an appeal, which continued under Trump.

Ending the cost-sharing subsidy payments was only one of two moves Trump made Thursday to dismantle Obamacare in the wake of Congress' failure to repeal the law. The other was an executive order directing the Labor Department to study how to make it easier for small businesses, and possibly individuals, to join together and buy health insurance through nationwide association health plans. The department could give small employers more flexibility to offer group coverage across state lines, providing them with a broader range of policies at lower rates.

The aim of the order is to give Americans more access to lower-cost plans, but critics warn they may provide skimpier benefits. This is a greater threat to Obamacare's long-term health since it could siphon off young and healthy consumers from the Obamacare exchanges, leaving mainly older and sicker workers behind, Levitt said.

President Trump is taking actions to dismantle Obamacare on his own. How do you think this will affect your health care coverage? Email healthcarestories@cnn.com. You could be included in an upcoming CNNMoney article.