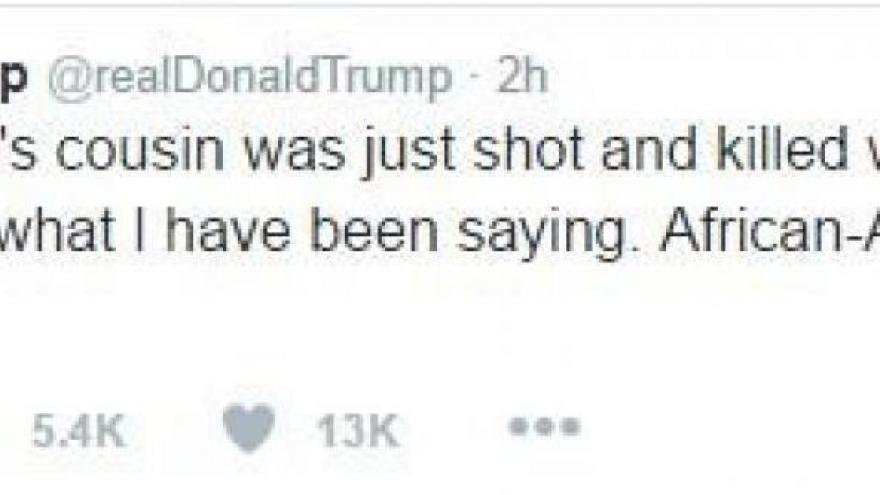 WASHINGTON (CNN) -- Donald Trump tweeted Saturday that tragedies like the death of NBA star Dwyane Wade's cousin are one of the reasons African-Americans will vote for the Republican nominee, later adding that he can "fix" inner-city problems.

"Dwayne Wade's cousin was just shot and killed walking her baby in Chicago. Just what I have been saying. African-Americans will VOTE TRUMP!" he tweeted, misspelling Wade's first name.

He later added, "My condolences to Dwyane Wade and his family, on the loss of Nykea Aldridge. They are in my thoughts and prayers."

Aldridge was fatally shot by a stray bullet Friday afternoon while pushing a stroller down a street in Chicago's South Side. The child was not injured.

"So we send our thoughts and prayers to the family and we also promise to fight for a much, much better tomorrow," Trump added.

Neither Wade nor his agent responded to a CNN request for comment on Trump's remarks.

Trump has taken to Twitter after past tragedies when he believes they confirm ideas he's proposed in his speeches. In the wake of the Orlando terrorist attack in June, Trump tweeted, "Appreciate the congrats for being right on radical Islamic terrorism, I don't want congrats, I want toughness & vigilance. We must be smart!"

Trump has cited problems in American inner cities as a reason why he believes African-Americans should vote for him. Speaking in Des Moines, he said crime and poverty in urban America "offends my sense of right and wrong to see anyone living in such conditions."

"They are living in terrible, terrible conditions -- beyond belief conditions. Bad," Trump said.

As he ticked down a list of poverty and crime statistics -- deploring in particular the numbers of shootings in several major American cities -- the Republican nominee bashed Democratic policies and argued that "it can't get any worse."

Trump vowed inner city residents under his administration would see job prospects rise and neighborhoods become safer, though he has offered few specifics as to how to achieve those outcomes.

"We just ought to be extending our sympathy to the family. That's the only reaction that is appropriate right now and maybe a sadness about this gun violence issue," the vice presidential candidate told reporters in Miami Lakes, Florida. "You see something like this and it's just, we should redouble our efforts to really adopt and promote smart strategies on that. But the sympathy issue is the one that ought to be our strong first reaction."

Other Democrats -- including Clinton -- have criticized Trump's tone and rhetoric about African-American issues as insensitive and have questioned his commitment to black voters. A recent NBC News/Wall Street Journal poll shows Clinton beating Trump 91%-1% among African-Americans.