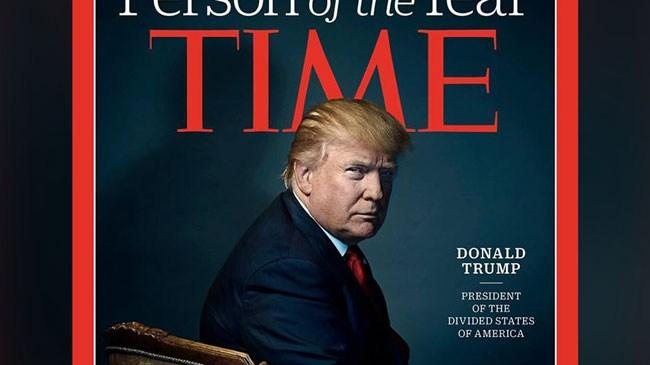 NEW YORK (CNNMoney) -- Time magazine has named Donald Trump its Person of the Year -- calling him "President of the Divided States of America."

"I don't think that we have ever seen one person, operating in such an unconventional way, have an impact on the events of the year," said Time editor Nancy Gibbs.

She called this year's choice "one of the more straightforward years." Trump beat runner-up Hillary Clinton for the distinction, which Gibbs said is given to the newsmaker who has the biggest influence on world events, for better or worse.

Placing third was "the hackers," to cover people who breached the records of major government organizations, politicians, celebrities and everyday citizens.

The announcement was revealed on NBC's "Today" show. Speaking on the show via phone, Trump called the title a "very, very great honor."

The magazine has been selecting the year's most influential person, group or idea since 1927. Its choices have included nearly every U.S. president, Adolf Hitler, Ayatollah Khomeini, Mahatma Gandhi and Pope Francis, along with groups like the "Ebola fighters." The title was changed in 1982 to "Machine of the Year" for the computer.

Other women have been named as part of a group or class of people.

"It's hard to measure the scale of his disruption," Gibbs wrote in the magazine's article about choosing Trump this year. "So which is it this year: Better or worse? The challenge for Donald Trump is how profoundly the country disagrees about the answer."

Trump has already appeared on Time's cover on numerous occasions this year, including two covers published before the election that featured a cartoon illustration of his melting face titled "Meltdown" and "Total meltdown."

Trump criticized the magazine last year when it picked Merkel, who he called the "person who is ruining Germany."

Trump, who had been a finalist, tweeted the magazine "would never pick me as person of the year despite being the big favorite."

Trump on Wednesday, however, called the magazine "important."

"It means a lot, especially me growing up reading Time magazine, and you know, it's a very important magazine, and I've been lucky enough to be on the cover many times this year," he said on NBC.