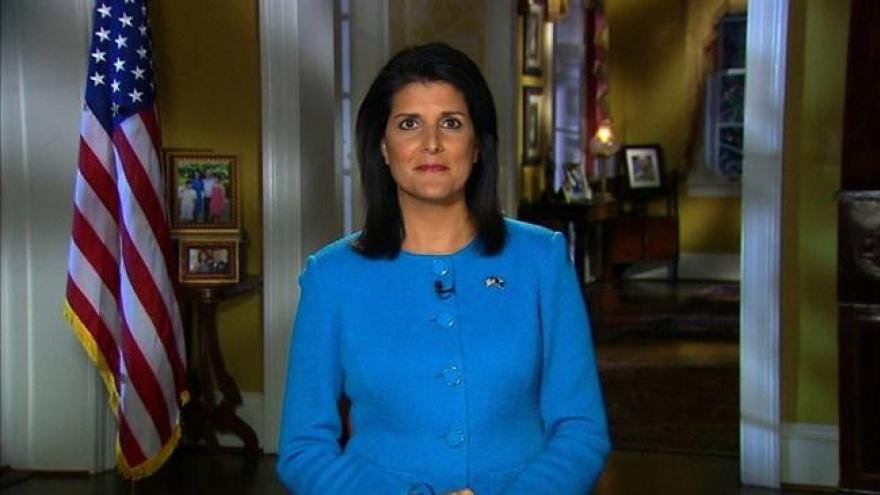 WASHINGTON (CNN) -- South Carolina Governor Nikki Haley, tapped by President-elect Donald Trump to be UN ambassador, questioned Wednesday at her Senate confirmation hearing whether the US's funding of the world body is worth it.

And she diverged sharply from many of the foreign policy views Trump has expressed, telling senators that she expected the President-elect's views to evolve under the counsel of his national security team.

Haley rapped the UN for its treatment of Israel and indicated that she thinks the US should reconsider its contribution of 22% of the annual budget.

"Are we getting what we pay for?" she asked.

Haley was questioned if she would shy away from cutting funding to certain UN agencies that take stands that displease the US.

"I won't shy away, and I need your help to do it," she told lawmakers, adding that her message to the UN would be, "If this doesn't change, the funding will stop."

Yet later in the hearing, Haley tried to soften her stance in an effort to appeal to Democrats who stressed the UN's work on health and food programs.

"I do not think we need to pull money from the UN, we don't believe in slash and burn, it's not something I would consider," Haley said, adding that she would advocate looking at individual parts of the UN and whether they deserved US backing.

"The UN and its specialized agencies have had numerous successes," Haley said. "However, any honest assessment also finds an institution that is often at odds with American national interests and American taxpayers ... I will take an outsider's look at the institution."

Haley's time before the committee was smooth in comparison to the simultaneous confirmation hearings of Trump's nominees to lead the Environmental Protection Agency and the health department. But on occasion, questions and answers reflected her lack of foreign policy background, with Democratic senators advising her to study up on issues.

In her opening statement, Haley emphasized the ways in which her experience as governor suited her for the UN job, saying she'd focus on US interests. In her remarks, she spoke at length on one international issue: Israel.

She said a December UN Security Council resolution that calls on Israel to stop settlement construction in Palestinian areas is "damaging" and a reflection of the UN's "long-history of anti-Israel bias." That resolution passed when the US abstained from voting.

"Nowhere has the UN's failure been more consistent and more outrageous than in its bias against our close ally Israel," Haley said. "Last month's passage of UN Resolution 2334 was a terrible mistake, making a peace agreement with the Israelis and the Palestinians even harder to achieve."

Haley was introduced before the Senate Foreign Relations Committee by South Carolina Republican Senator Lindsey Graham, the driving force behind a bill to defund the UN for its December vote against Israel.

Saying that the UN is known for anti-Zionism, Haley continued that "more Americans are becoming convinced ... that the United Nations does more harm than good."

Haley was checked on that point. The top Democrat on the committee, Maryland Sen. Ben Cardin, said that while "the UN's failings are well known, less known is what it gets right: vaccinating 40% of the world's children, assisting more than 55 million refugees fleeing war, famine or human rights abuses; providing food to 90 million people in 80 countries; and maternal health work that has saved the lives of 30 million women."

But Cardin agreed with Haley on Israel, saying that "the UN must be fair. One of the persistent weaknesses across the UN system has been the biased and ugly approach to issues that relate to Israel. This must end."

The 45-year-old Haley was grilled early about Russia's global role and human rights, issues that tripped up Rex Tillerson, the former ExxonMobil CEO Trump tapped to be his lead US diplomat as secretary of state. Some Republicans and Democrats said they were ambivalent or flatly against Tillerson after his hearing last week and are expected to return to those questions when Haley appears before the Senate Foreign Relations Committee.

Another Trump nominee, Ret. Gen. James Mattis, who is being considered for Secretary of Defense, easily cleared the Senate Armed Services Committee, with a 26-1 vote, on Wednesday. New York Sen. Kristen Gillibrand opposed his nomination, which must still be approved by the full Senate.

In her opening remarks, Haley stressed to the committee that in "the matter of human rights ... I have a clear understanding that it's not acceptable to stay silent when our values are challenged."

Haley also faced early queries about the foreign policy differences between Trump and his proposed Cabinet members -- and quickly established that she holds positions that differ from the President-elect's public statements.

She also acknowledged Russian hacking during the presidential election, something Trump has only done recently and grudgingly. Haley said that at the UN she would convey "that we are aware that it has happened, that we don't find it acceptable, and that we are going to fight back every time we see something like that happening."

Haley also condemned extrajudicial killings directed by Philippine President Rodrigo Duterte, something Tillerson wouldn't do. And she backed away from the idea of a registry of Muslim citizens in the US.

The South Carolina governor took issue with Trump's recent comments about German Chancellor Angela Merkel. Trump has said her refugee policies are a "catastrophic mistake" and equated her to Russian President Vladimir Putin in an interview, saying he'd trust both equally but wasn't sure how long that would last.

Haley initially tried to explain Trump's approach by saying that he's looking at "where he can relate to different leaders." When New Hampshire Senator Jeanne Shaheen, a Democrat, observed that Trump's comments weren't "a good way to relate to Angela Merkel," Haley replied, "No, it's not."

Haley also reaffirmed the value of NATO, an alliance Trump has said is obsolete, adding that she felt the president-elect's views would shift as he was advised by his national security team.

And she made clear that she has differences with Trump on the UN as well.

Trump has "made comments about the UN, but those are not my feelings and I don't think that's going to happen," she said, apparently referring to tweets in which the President-elect has dismissed the UN as a "club" for people who like a good time.

On working for Trump on international issues, Haley said, "I do anticipate that he will listen to all of us and see it the way we see it."

But she said the discussions she's had with Trump about international issues have only been general. Asked by Senator Robert Menendez, a New Jersey Democrat, whether she'd specifically discussed Russia with Trump, Haley said they'd discussed Moscow generally.

"Russia came up, yes, it did, just from the standpoint that we're going to have issues with them," she told Menendez, who then asked her about whether the two had discussed China, which, like Russia, is also a UN Security Council member.

"The same thing," Haley said, indicating the conversation had only been generally about "the countries we're going to have issues with."

Haley's life, to date, has been rooted in South Carolina, where she was born and educated as the child of Sikh immigrants. She graduated from Clemson University with a degree in accounting, worked at her mother's clothing company and immersed herself in local Republican politics.

She won an election for the South Carolina House of Representative in 2004, holding that position until she was elected governor in 2010, becoming the first woman to lead the state and the second Indian-American governor in the country.