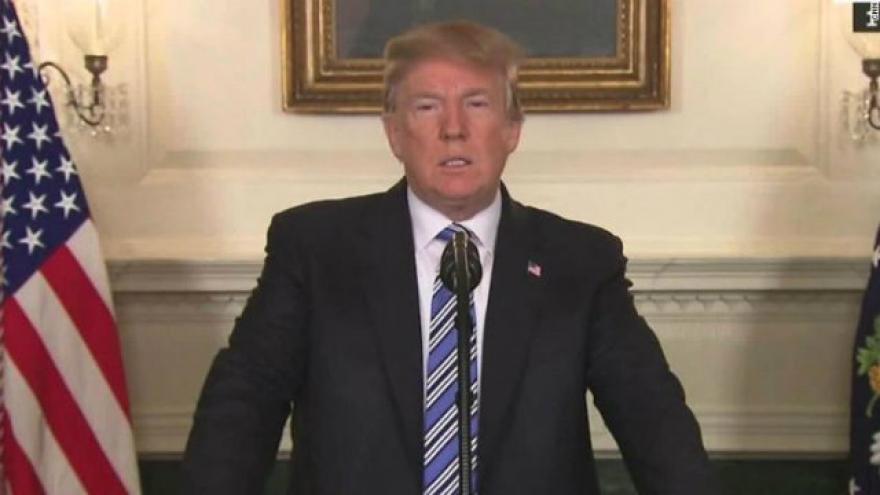 (CNN) -- President Donald Trump "is supportive of efforts to improve the federal background check system" for gun purchases, less than a week after the Florida school shooting that killed 17 people.

Principal Deputy Press Secretary Raj Shah said in a statement on Monday that Trump spoke with Sen. John Cornyn, a Texas Republican, on Friday about a bill he introduced with Sen. Chris Murphy, a Connecticut Democrat, that aims to strengthen how state and federal governments report offenses that could prohibit people from buying a gun.

"While discussions are ongoing and revisions are being considered, the President is supportive of efforts to improve the federal background check system," Shah said. Students, teachers and lawmakers have urged Trump and other Republican lawmakers to take action on guns in the wake of the Parkland, Florida, shooting.

Trump, however, ran for president as a pro-gun candidate and tied himself to the National Rifle Association throughout the campaign. The White House didn't vigorously push the Cornyn-Murphy bill when it was introduced, and the President also said he was open to banning bump stocks, devices that enable rifles to fire more rapidly, in the wake of last fall's Las Vegas shooting -- but there hasn't been significant further action by the White House on that front, either.

Trump's only action on guns as president undid restrictions aimed at mental illness by signing a measure that nixed a regulation that required the Social Security Administration to disclose information quarterly to the national gun background check system about certain people with mental illness. It's unclear whether that measure would have helped prevent last week's massacre.

The House passed a bill in December that would fill holes in the National Criminal Instant Background Check system (NCIS) that were highlighted after a mass shooting at a Texas church last year. But the bill, which also loosened gun regulations and expanded the rights to carry a concealed firearm, faces long odds in the Senate. Similarly, the Murphy-Cornyn bill -- which was introduced in November but has not yet progressed through the Senate -- doesn't currently have a clear path forward in the House without the concealed-carry provision attached.

Over the course of the weekend, Trump heard a variety of opinions on the gun issue from his group of friends at Mar-a-Lago, two people familiar with the matter said. Out of respect for the victims -- and wary of appearing insensitive -- Trump skipped his typical rounds of golf as funerals for the victims proceeded about 50 miles south in Broward County.

Trump told people he encountered at his club that he would look into steps that might make it harder for young people or mentally ill people to obtain firearms. A White House official said over the weekend the President did not like the television coverage the issue was getting.

During dinner on Saturday night on the Mar-a-Lago patio, Trump heard from television host Geraldo Rivera on the issue, according to a person familiar with their conversation. Rivera floated the notion of raising the legal age of purchase for military-style rifles such as the AR-15 from 18 to 21 — a step that could have prevented the Parkland shooter from obtaining his murder weapon.

Rivera's views on the issue were contrasted by another dinner guest, Donald Trump Jr., an avowed gun rights supporter who accompanied his father to this year's NRA annual conference in Atlanta. The men, along with Eric Trump, had an animated conversation on the issue, a person familiar with the situation said. The group also discussed ideas to heighten security inside schools.

Trump told people this weekend that he's seen the protests from students at the Parkland high school where the shooting took place and wants to do something. But he's not certain yet which steps to take.

Trump and House Speaker Paul Ryan discussed the Parkland shooting during their talks on Sunday afternoon, the White House said. But neither the White House nor Ryan's office would say whether any legislative steps on gun control were raised.

Though Trump ran as an anti-gun control candidate in 2016, before he was a political figure he backed a ban on assault weapons and a longer waiting period for people to buy a weapon.

"I generally oppose gun control, but I support the ban on assault weapons and I support a slightly longer waiting period to purchase a gun," he wrote in his 2000 book, "The America We Deserve." "With today's Internet technology, we should be able to tell within 72 hours if a potential gun owner has a record."

Trump, who said at a 2016 debate that he no longer supported an assault-weapons ban, made gun rights a centerpiece of his campaign.