Trump picks Mulvaney to be acting chief of staff 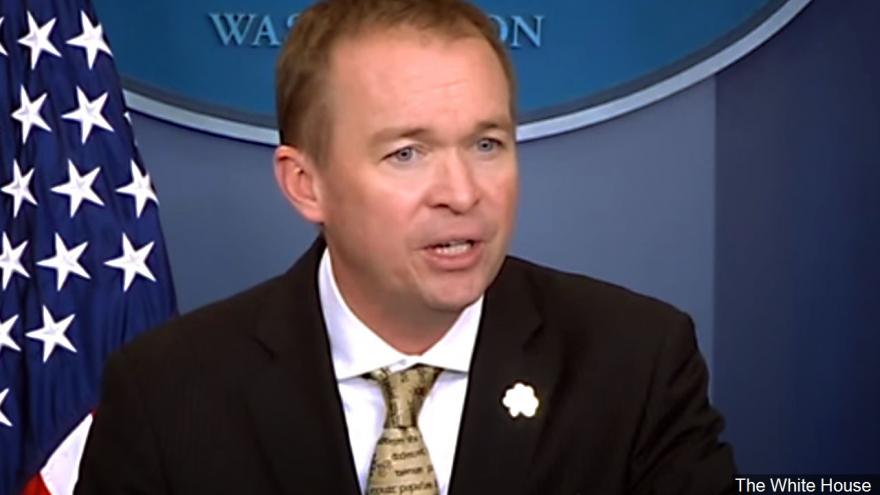 WASHINGTON (AP) — President Donald Trump on Friday picked budget director Mick Mulvaney to be his next chief of staff, ending a chaotic search for a new chief of staff that had been inching forward with the feel of an unfolding reality TV show.

Trump tweeted that Mulvaney "will be named Acting White House Chief of Staff, replacing General John Kelly, who has served our Country with distinction."

"Mick has done an outstanding job while in the Administration," Trump posted. "I look forward to working with him in this new capacity as we continue to MAKE AMERICA GREAT AGAIN! John will be staying until the end of the year. He is a GREAT PATRIOT and I want to personally thank him for his service!"

Though deemed an "acting" chief of staff, Mulvaney's term will be open-ended, according to a senior White House official speaking on the condition of anonymity to discuss personnel matters. The position does not require confirmation.

Mulvaney, who will be Trump's third chief of staff, will now take on his third job in the administration; he is the head of the Office of Management and had simultaneously led the Consumer Financial Protection Bureau.

A former Tea Party congressman, was among a faction on the hard right that bullied GOP leaders into a 2013 government shutdown confrontation by insisting on lacing a must-pass spending bill with provisions designed to cripple President Barack Obama's signature health care law.

The appointment of the affable, fast-talking South Carolinian came just hours after another candidate for the post, former New Jersey Gov. Chris Christie, took himself out of contention for the job. Christie cited family reasons in a statement saying that he was asking Trump to remove him from consideration. He had met with Trump on Thursday to discuss the job, according to a person familiar with the meeting who was not authorized to discuss it publicly.

Christie's departure is the latest twist in a search triggered when Trump's preferred candidate to replace Kelly bowed out.

Trump said Thursday that he was weighing five possibilities. Among the others he considered: his 2016 deputy campaign manager David Bossie, U.S. Trade Representative Robert Lighthizer and Treasury Secretary Steven Mnuchin.

Trump senior aide and son-in-law Jared Kushner, who had also been the subject of speculation, signaled his lack of interest. A person familiar with the matter said Kushner believed that he could serve the president best in his current role. The person spoke on condition of anonymity to discuss internal matters. The names of acting Attorney General Matthew Whitaker and even White House communications director Bill Shine and press secretary Sarah Huckabee Sanders had also been floated.

The president's hunt for a new chief reverted to square one last weekend when Nick Ayers, Vice President Mike Pence's chief of staff, took himself out of the running and decided that he would instead leave the White House. The announcement surprised even senior staffers who believed that Ayers' ascension was a done deal.