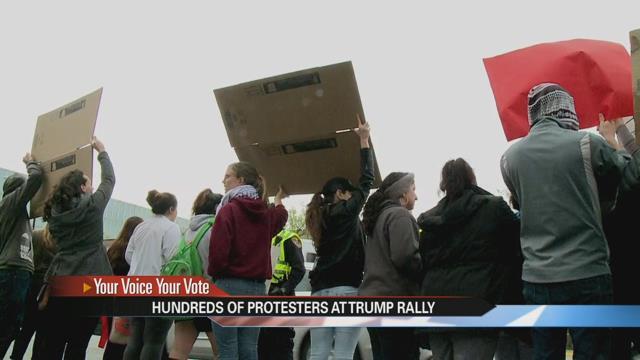 Nearly 15,000 rally goers were expected at the Century Center to see Donald Trump, hundreds of protesters stood outside wanting their voices heard.

But unlike other Trump rally’s in recent days, it was a peaceful protest in Downtown South Bend.

Hundreds of protesters outside the Century Center voicing their First Amendment right and their opinion about Republican Presidential Candidate Donald Trump.

“It scares me this man that spews such hate and I 'm actually baffled this many people lined up to see him and support him,” said protester Ruth Friend.

“I think he's a frightening man.  I think he’s a bully. So I thought I  would come and just hold a sign,” said Friend.

Not only protesters, some supporters also on hand for this mostly peaceful protest.

Henry snow is a Trump supporter and he thinks some of the riots from past rally’s have been provoked.

They provoke and agitate the peaceful supporters that stand in line. All they are trying to do is provoke a reaction. I see in Chicago, there is a bad apple in every crowd,” said protester Henry Snow.

“It is what it is, people have a right to protest and rally and we are trying to keep the peace between both that’s all.  We don't care who yells back and forth. As long as hands don't go flying we'll be OK,” said Ruskowski.

And as the SBPD Police Chief told us earlier today, the last thing they have on their minds is to handcuff and arrest people as they have the right to express their personal and political beliefs.

“I can’t fathom why these people are here to see him. If anything should be said its: you're fired,” said Friend.