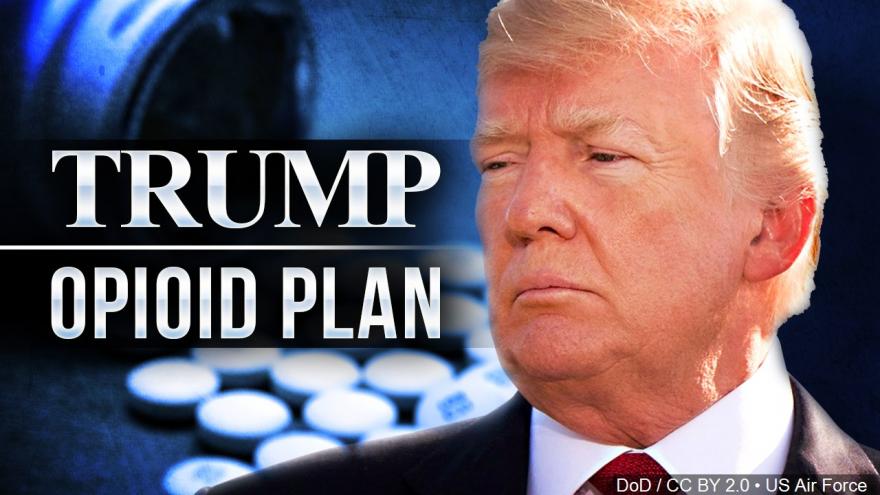 Speaking at an event focused on the opioid epidemic in New Hampshire, Trump said it was critical to "get tough" on combating the epidemic.

"If we don't get tough on the drug dealers, we are wasting our time," Trump said. "And that toughness includes the death penalty."

Trump went on to say that dealers "will kill thousands of people during their lifetime" but won't be punished for the carnage they cause.

"This is about winning a very, very tough problem and if we don't get very tough on these dealers, it is not going to happen, folks," he said.

Monday's event marks Trump's first trip back to the first-in-the-nation primary state -- and the state that that introduced the businessman-turned-politician to the opioid scourge -- since he won the presidency.

The President, joined by first lady Melania Trump, laid out a plan that looks to balance increasing punitive measures to stop drug traffickers and broadening the federal government's involvement in combating the epidemic with a sweeping ad campaign about addiction and more funding for drug treatment programs, according to Trump administration officials briefed on the plans.

The plan will include stiffer penalties for high-intensity drug traffickers, including the death penalty for some, Trump said.

Though Trump has long advocated for sentencing certain drug traffickers to death, public policy experts have condemned the proposal even before Trump rolled it out, arguing that it misses the cause of the opioid epidemic.

Trump acknowledged the US may not be ready for the death penalty for drug dealers.

"Maybe our country is not ready for that. It's possible ... and I can understand it," he said. "Maybe, although personally I can't understand that."

He also said the administration will push a "large scale" ad campaign aimed at combating the opioid epidemic.

"The best way to beat the drug crisis is to keep people from getting hooked in the first place," Trump said. "This has been something I have been strongly in favor of -- spending a lot of money on great commercials showing how bad it is."

White House officials told CNN that Trump's broader plan will focus on key areas: law enforcement and interdiction, prevention and education through a sizable advertising campaign, improving the ability to fund treatment through the federal government, and helping those impacted by the epidemic find jobs while fighting addiction.

Congress recently appropriated $6 billion to combat the opioid epidemic, and a senior administration official told CNN that Trump's plan will lay out how the White House believes that money should be spent. At the time, treatment advocates and drug policy experts were concerned the uptick in funding wouldn't be spent wisely and wasn't nearly enough.

Trump has credited voters in New Hampshire with introducing him to the opioid crisis during his 2016 campaign. He frequently referenced the scourge when campaigning in the state, which has been epicenter in the fight against opioids. But in a call with Mexican President Enrique Peña Nieto shortly after his inauguration, Trump referred to the state as a "a drug-infested den," drawing fierce criticism from the state's leaders.

Days before Election Day in 2016 -- when time is a campaign's most precious commodity -- Trump even traveled to New Hampshire to discuss opioid addiction and pledge to make fighting the epidemic a focus.

His response as President, however, has been mixed, according to epidemic experts. The President has been accused of sidelining the Office of National Drug Policy Control, failing to heed the recommendations of his opioid council and focusing too much on the punitive measure to respond to the epidemic.

Recently released numbers from the Centers for Disease Control and Prevention found that around 64,000 people died from drug overdoses in 2016. And since 1999, the number of American overdose deaths involving opioids has quadrupled.