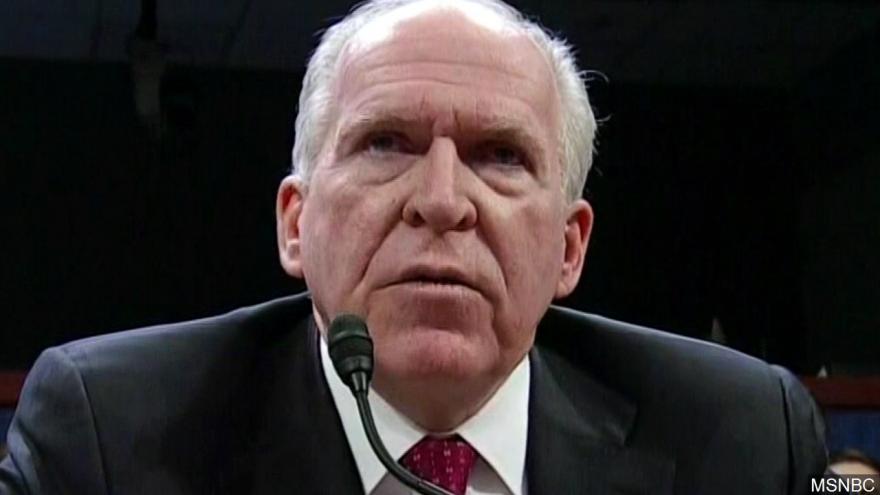 (CNN) -- President Donald Trump announced Wednesday he had revoked former CIA director John Brennan's security clearance, marking an unprecedented use of a president's authority over the classification system to strike back at one of his prominent critics.

"As the head of the executive branch and commander in chief, I have a unique constitutional responsibility to protect the nation's classified information, including by controlling access to it. Today, in fulfilling that responsibility, I have decided to revoke the security clearance of John Brennan, former director of the Central Intelligence Agency," Trump said in a statement dictated in the White House briefing room by his press secretary Sarah Sanders.

Brennan is the first former national security official to see his security clearance revoked since the White House announced last month that Trump was considering taking that action against several of his most vocal critics in the national security world.

Director of National Intelligence Dan Coats was not consulted on revoking Brennan's clearance, an official with knowledge told CNN's Jim Sciutto. Coats is the top intelligence official working in government and was appointed by Trump.

While Brennan has been a vocal critic of the President since Trump took office, Brennan is well-regarded by both Republicans and Democrats as a seasoned national security expert.

The names amount to an unofficial enemies list for this White House. All of those individuals have been the target of Trump's public ire or criticized Trump -- or both.

Despite that, Sanders insisted on Wednesday that Trump's decision to revoke Brennan's clearance and put other critics on notice is not politically motivated.

"The President has a constitutional responsibility to protect classified information and who has access to it, and that's what he's doing is fulfilling that responsibility in this action," Sanders said.

She declined to say why the list included no supporters of the President, such as Trump's former national security adviser Michael Flynn, who pleaded guilty to lying to the FBI.

Trump in his statement justified the move against Brennan by citing the CIA's infiltration of Senate computers during Brennan's time at the helm of the agency during the Obama administration and maintained Brennan has "recently leveraged his status" as a former official to "make a series of unfounded and outrageous allegations" about the administration, which Trump called "increasingly frenzied commentary."

"Such access is particularly inappropriate when such officials have transitioned into highly partisan positions and seek to use real or perceived access to sensitive information to validate their political attacks," Sanders said, reading from Trump's statement.