Trump says 3 Americans held in North Korea have been released 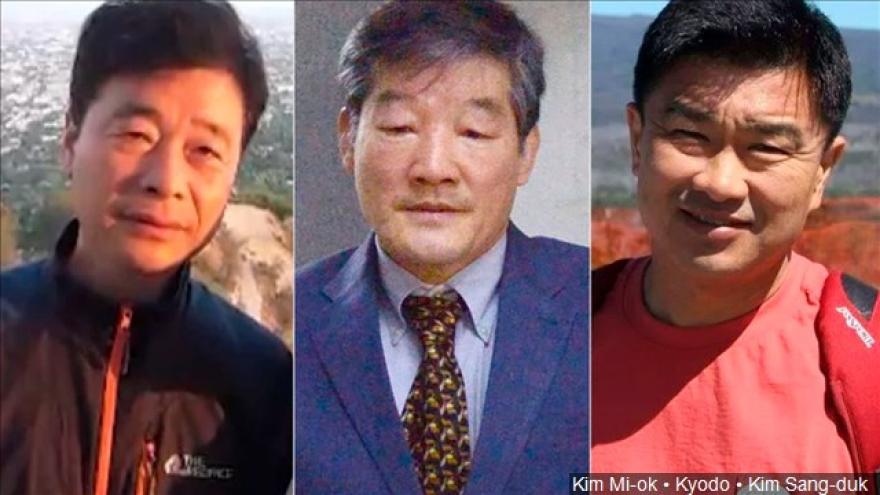 Pictured above are the three Americans who have been held in North Korea and are set to be released May 10: Kim Hak Song (left), Kim Dong Chul, and Kim Sang Duk (Tony Kim). Photo courtesy Kim Mi-Ok / Kyodo / Kim Sang-Duk

(CNN) -- President Donald Trump announced Wednesday that three Americans held in North Korea have been released and are on their way back home.

"I am pleased to inform you that Secretary of State Mike Pompeo is in the air and on his way back from North Korea with the 3 wonderful gentlemen that everyone is looking so forward to meeting. They seem to be in good health," Trump tweeted.

He added that Pompeo had a "good meeting" with North Korean leader Kim Jong Un and said a "date & place set" for a meeting between the two leaders.

The President said Pompeo and his "guests" will be arriving at Andrews Air Force Base in Maryland at 2 a.m. ET, presumably Thursday, where he will greet them.

While Kim Dong Chul has been in North Korean custody since before Trump was elected, the other two detainees were arrested last spring, after Trump's inauguration and as tensions between Washington and Pyongyang were beginning to ramp up.

Tony Kim and Kim Hak-song, who were arrested in April and May of 2017, respectively, were both accused of carrying out "hostile acts" against the Kim Jong Un regime. Both worked at the Pyongyang University of Science and Technology, which bills itself as the only privately run university in the North Korean capital.

The family members of the two educators have said their loved ones are innocent. Shortly after Kim Hak-song was detained, his wife said in an interview with CNN that her husband is an agricultural expert and was teaching rice-growing at the university, trying to help North Koreans feed themselves.

Kim Dong Chul was arrested in 2015 for spying on behalf of South Korea, he told CNN in January 2016. The interview was conducted in the presence of North Korean officials, so CNN could not determine whether Kim's comments were made under duress.

An official with knowledge of the negotiations previously told CNN that the North Koreans decided to free the Americans two months ago, and that North Korea's foreign minister, Ri Yong Ho, had proposed their release during his visit to Sweden in March.

At the time, US officials insisted that their release "must not be related or used to loosen the main issue of denuclearization," the source said, but that message seems to have changed in recent days, according to a source at the National Security Council, who said the development would be viewed as a goodwill gesture ahead of the planned summit with Kim Jong Un.

Trump and his allies outside the government had sought to fan the heightened expectations ahead of Thursday's official announcement, casting the potential development as evidence of his negotiating prowess ahead of the summit.

Trump had hinted at a potential development in their case last week in a tweet: "As everybody is aware, the past Administration has long been asking for three detainees to be released from a North Korean Labor camp, but to no avail. Stay tuned!"

He did not mention that two of the Americans had been detained after he became President.

And Rudy Giuliani, a member of Trump's legal team but not himself an employee of the government, teased the release last week as well.