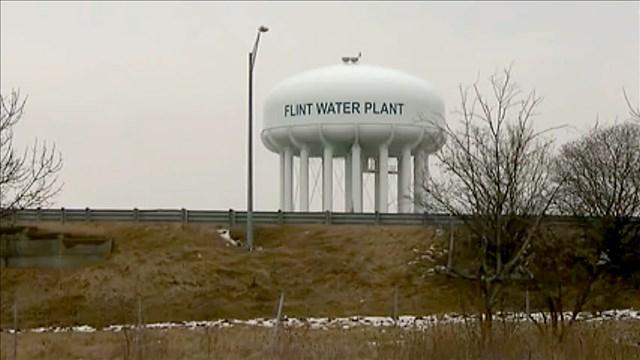 Flint has gained national attention over the past year after cost-cutting measures led to tainted drinking water that contained lead and other toxins. The incident has been seized upon by members of both parties as an example of government mismanagement and America's aging infrastructure.

Trump spoke to The Detroit News about the water crisis earlier this month.

Throughout most of his campaign, however, the real estate mogul has rarely addressed the crisis or offer his views, including whether Rick Snyder, the state's Republican governor, should resign amid mounting pressure.

When he was asked in January as the crisis gained national media attention about the situation, Trump said he "shouldn't be commenting."

"Well it's a shame what's happening in Flint, Michigan. A thing like that shouldn't happen, but again I don't want to comment on that. They've got a very difficult problem," Trump said then.

And in an interview with a local Michigan TV station on the morning of the state's primary, Trump called it a "catastrophic event," but declined to say whether he believed Snyder should resign.

More than 40% of Flint's 98,310 residents live below the poverty line. And more than half are African-American, a historically strong Democratic voting bloc that Trump has recently appealed to on the campaign trail. His visit to Flint will come one day after the airing of an interview he gave with the minister of a predominantly black church he visited in Detroit earlier this month.

Flint's most high profile moment in the 2016 election came in March when the city hosted a debate between Democratic nominee Hillary Clinton and her primary rival, Bernie Sanders.

Clinton spoke in Flint earlier this year, arguing that had the water crisis had happened in a rich Detroit suburb, the response would have been faster and more effective.

"I think every single American should be outraged," she said in January. "We've had a city in the United States of America where the population, which is poor in many ways and majority African-American, has been drinking and bathing in lead-contaminated water. And the governor of that state acted as though he didn't really care."

Clinton has been criticized, namely by Snyder, for politicizing the water crisis.