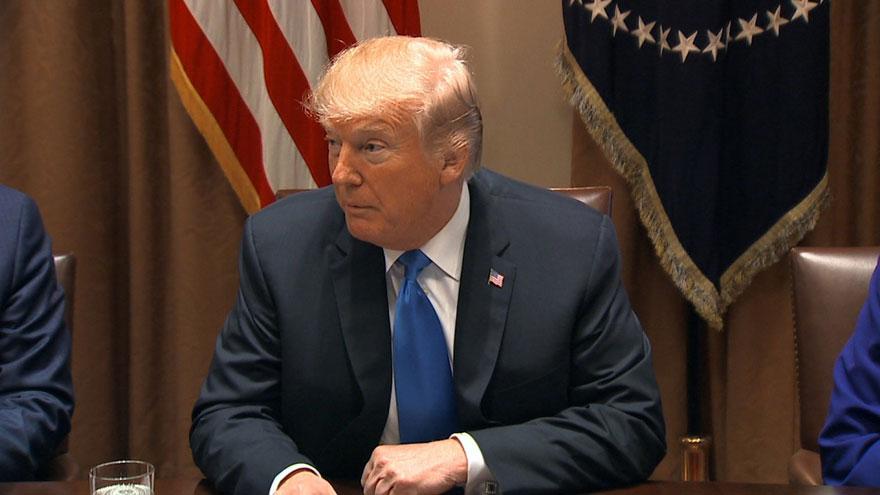 (CNN) -- President Donald Trump on Wednesday signaled his support for a hodgepodge of policies -- from strengthening background checks to raising the minimum age to buy certain guns and taking guns away from the mentally ill -- during a meeting with a bipartisan group of lawmakers at the White House on Wednesday.

But after an hour-long televised meeting, it was still unclear what specific legislation Trump would support. And the wide-ranging meeting, which included blunt back-and-forths between Trump and members of both parties, laid bare the vast divide on gun legislation and Trump's own unfamiliarity with the searing, years-old gun debate.

Trump again, brought up his support for raising the age of gun purchases from 18 to 21, though he didn't specifically say he would sign a bill that includes that provision.

The President also said he was eagerly waiting to sign an executive action to ban bump fire stocks, gun accessories that make it easier for semi-automatic weapons to fire like they are automatic.

But, during an exchange with Sen. Joe Manchin, a Democrat, and Sen. Pat Toomey, a Republican, Trump signaled that he did not know much about the duo's bill to strengthen background checks.

Trump said he "hasn't heard a lot about" the Manchin-Toomey background check legislation during the meeting, asking during the exchange whether the bill had bipartisan support. The measure, which has been pushed for five years, garnered 54 votes in the Senate in 2013.

During the Wednesday meeting, Trump asked Toomey whether his proposal raised the age of gun purchases from 18 to 21. When Toomey said the bill didn't, Trump said, "Because you're afraid of the NRA, right?"

Trump has signaled a willingness to address gun issues in the wake of the Parkland, Florida, school shooting that left 17 people dead earlier this month. But his focus has vacillated from strengthening background checks to more forceful gun control measures.

During the Tuesday meeting, Trump called on the bipartisan group of lawmakers to "turn our grief into action" and move in a bipartisan way "to end this senseless violence" of mass shootings.

"It can be ended and it will be ended," Trump said.

The President once again called for the need to "harden" schools and arming "people with a certified training" to carry guns in schools, though he noted that "some people will oppose" that -- and urged those opponents to voice their criticism.

Trump also stressed the importance of strengthening the background check system and once again said he pressed the National Rifle Association over the weekend on the need for action.

"I am the biggest fan of the Second Amendment. I am a big fan of the NRA. I had lunch with (them) on Sunday and I said, 'It's time, we're gonna stop this nonsense this time,' " Trump said.

Trump, seemingly eager to do something where his predecessors have failed, added he was eager to bear the responsibility of rallying Republicans around substantive legislation.

"I like that responsibility," Trump said. "I really do. It's time that a President step up."