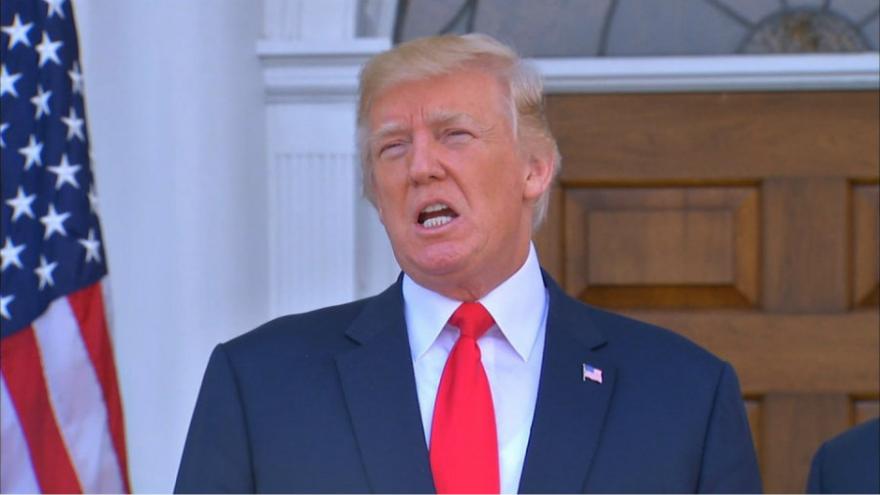 (CNN) -- US President Donald Trump called the leader of China and spoke with the governor of Guam on Friday amid mounting tensions with North Korea. Trump also said he is considering "very strong" new sanctions against Pyongyang.

Guam Gov. Eddie Baza Calvo, on the US territory in an area of the Pacific that North Korea has threatened to strike with missiles, said he spoke with Trump and chief of staff John Kelly, and he posted audio of the call on Facebook.

"Both assured me that the people of Guam are safe," Calvo wrote. "In the President's words they are behind us '1,000 percent.' As the head of the Government of Guam, I appreciate their reassurances that my family, my friends, everyone on this island, are all safe."

In Japan, the defense ministry deployed the missile interception system to military bases in four prefectures, video from the four locations showed Saturday.

The prefectures sit in a line between North Korea and Guam. Pyongyang identified three of the prefectures as the regions over which its missiles would fly on the way toward the US territory.

Meanwhile, Trump stood by his bellicose rhetoric on North Korea on Friday, saying leader Kim Jong Un "will truly regret it and he will regret it fast" if he issues an overt threat or attacks Guam or a US ally.

"This man will not get away with what he is doing," Trump told reporters. "If he utters one threat in the form of an overt threat ... or if he does anything with respect to Guam, or any place else that is an American territory or an American ally, he will truly regret it and he will regret it fast."

Chinese President Xi Jinping called for restraint during a phone call Saturday with President Trump over the escalating tensions with North Korea.

Trump has urged the Chinese government to exert more pressure on the North Korean regime, with little success.

Trump getting ready to go after China on trade

During the call Trump also informed Xi that he plans to direct his administration on Monday to investigate Chinese trade practices, a senior administration official told CNN.

Saber-rattling from North Koreas has dominated Trump's 17-day working vacation in New Jersey. When asked about the ratcheted-up rhetoric in recent weeks between the US and North Korea, Trump said there are good options on the table for dealing with the tensions, but also some bad ones.

"Hopefully it will all work out," Trump said before the call with Xi. "Nobody loves a peaceful solution better than President Trump, that I can tell you. But this has been going on for many years. Would have been a lot easier to solve this years ago, before they were in the position they are in.

"But we will see what happens. We think that lots of good things could happen and we also could have a bad solution."

Trump called Xi after meeting with US Ambassador to the United Nations Nikki Haley and Secretary of State Rex Tillerson in Bedminster.

Earlier in the day, Trump issued a warning to North Korea.

"I hope they are going to fully understand the gravity of what I said. And what I said is what I mean," Trump said, adding that the significance of his words was "pretty obvious" and his administration is looking "very carefully" at possible future actions against North Korea.

Foreign policy and national security experts have raised questions about Trump's threatening response to North Korea, noting that past administrations have tried to avoid the President commenting on North Korea's threats in order to avoid giving them credibility.

Trump dismissed the criticism Friday, saying the only reason they are critical of his response is "because it's me."

"If somebody else uttered the exact same words that I uttered they would say what a great statement, what a wonderful statement," Trump said, adding that there are "tens of millions of people in this country that are so happy with what I am saying."

Trump's rhetoric and North Korea's response have unsettled powers in the Asia-Pacific region, with some scrambling to respond to the escalation of tensions.

Neighboring powers urged restraint. Russia called on the Trump administration to keep calm, and Friday, Russian Foreign Minister Sergey Lavrov told state media that his country was working with China on a "double freezing" plan to address the threat.

"Kim Jong Un freezes any nuclear tests and any missile launches -- we mean ballistic missiles -- and the US and South Korea freeze large-scale military exercises," Lavrov said, adding that North Korea regularly uses the drills to justify its missile tests and nuclear program.

Other foreign leaders raised questions about whether there was a military option in North Korea. German Chancellor Angela Merkel said Friday that "an escalation of rhetoric will not contribute to a solution" of the conflict in North Korea.

"I do not see a military solution to this conflict," she added.

Trump praised Merkel on Friday as a "very good person," but said she was speaking for Germany, not the United States.