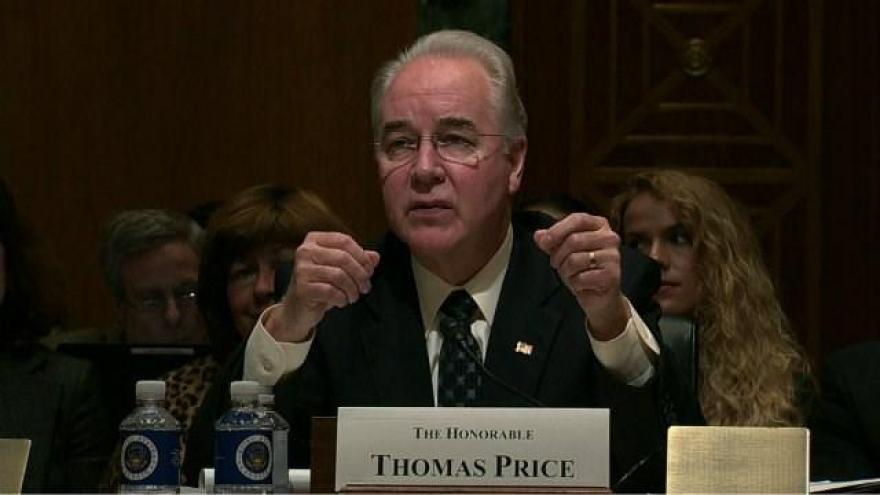 NEW YORK (CNNMoney) -- Health Secretary Tom Price doesn't have a lot of time to settle into his new job before he has to make some major moves on Obamacare.

With Congress still divided over how to repeal and replace the law, insurers, consumers and others will be looking to Price to signal what's next for the massive Affordable Care Act. President Donald Trump last month said that the administration will be rolling out its plan for Obamacare soon after Price's confirmation and will work with lawmakers to repeal and replace the law.

Even before Price was confirmed in the early morning hours on Friday, the Health & Human Services Department has already taken its first steps. Last week, the agency filed a draft proposed rule on the Affordable Care Act but has yet to announce the details. The rule was titled "market stabilization," another indication that the Trump administration and lawmakers are weighing strengthening the law first so that the individual market doesn't crumble before Obamacare can be repealed and replaced.

The rule's details will likely be released next week.

A Monday meeting of HHS and other federal government officials, as well as representatives of the Blue Cross and Blue Shield Association, which represents major players on the Obamacare exchanges, may give some insight into what's under consideration. Notice of the meeting, along with several documents, was posted on a federal agency website.

The handouts included the industry group's wish list to stabilize and reform the market, as well as a timetable showing how little time the administration has to act. The chart states that insurers need the final rules by mid-April to adjust their plans and premiums for 2018 and must inform policyholders by early July if they are exiting a market.

Many of the items on the list are already under discussion on Capitol Hill and in executive branch circles. They include:

Maintaining the cost-sharing subsidies, which provides federal funds to help reduce low-income enrollees' deductibles and co-pays. A federal judge last year ruled Congress did not authorize the payments, but stayed her ruling until later this month. Limiting consumers' ability to sign up for coverage outside of the open enrollment period so that people don't wait until they are sick to purchase plans. Eliminating Obamacare taxes levied on health insurers. Requiring people to pay any premiums owed before they can re-enroll. Giving states more regulatory authority and flexibility.

Insurance industry representatives also told federal officials they want permission to renew certain pre-Obamacare policies currently held by customers. The Obama administration allowed carriers to keep customers in these plans, which do not adhere to the law's strict coverage rules, in specific circumstances.

"These steps are needed to stabilize this market, to keep costs in check and ensure that consumers can access coverage they can afford. We've long advocated these measures with the previous administration," said Alissa Fox, senior vice president at the Blue Cross Blue Shield Association.

Other points on the list can only be accomplished by Congress. Insurers want the ability to charge those age 50 and older higher premiums in order to reduce rates for younger consumers and entice more of them to sign up.

Also, insurers anticipate that Republicans will get rid of the blanket Obamacare provision requiring coverage of those with pre-existing conditions. Republicans have said they would only protect this group if they did not have a lapse in coverage. Those who are uninsured could face exclusions or higher premiums, or they might be placed into a state-based, high-risk pool. So carriers want lawmakers to put in place incentives to encourage people to maintain continuous coverage and to start funding high-risk pools next year.

Other media outlets have reported that the HHS rule involves tightening special enrollment periods, cutting consumers off if they are more than 30 days late on their premiums and allowing insurers to charge older enrollees more.

Much of the focus of the new administration will be to help those on the individual market who make too much to qualify for subsidies and "are getting killed" by rising premiums and high deductibles, said Edmund Haislmaier, senior research fellow in Health Policy Studies at the Heritage Foundation, who served on the Trump transition team. The moves will serve to stabilize the insurance markets for 2018 with the aim of lowering premiums. Also, Republicans must make sure insurers don't flee and premiums skyrocket further.

Just how quickly the new Health Secretary can affect Obamacare remains to be seen. Just hours after taking office, Trump issued his first executive order directing federal agencies to limit the financial burden of Obamacare on consumers, insurers, states and others, but much of the law is encased in regulation, which can take at least a year to change. Also, the administration and lawmakers have said the 20 million Americans who have insurance thanks to the law will not be left uncovered. The promise could be at odds with efforts to repeal -- or even significantly adjust -- Obamacare.

But Price and his staff can have an impact just in their day-to-day decisions, said Nicholas Bagley, a law professor at the University of Michigan. For instance, they may interpret certain statutes more loosely than Obama officials did.

"Whether the administration takes a supportive attitude or adopts a position of malign neglect can make an enormous difference," he said.