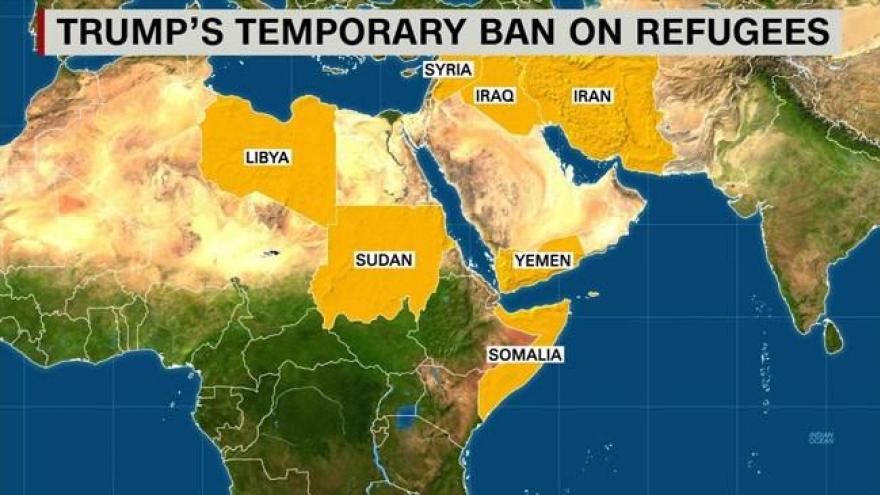 NEW YORK (CNNMoney) -- Tech executives in particular have expressed deep concern about President Trump's ban on travel by citizens of seven Muslim-majority countries. But leaders of companies across the economy are speaking out.

Immigrants have played a big role building some major U.S. companies, particularly in tech. A 2011 report from the Partnership for a New American Economy estimates that 45% of high-tech companies in the Fortune 500 were founded by first- or second-generation Americans.

"Trump's actions are hurting Netflix employees around the world, and are so un-American it pains us all," Hastings said on Facebook. "Worse, these actions will make America less safe (through hatred and loss of allies) rather than more safe."

"We are living in an unprecedented time," Schultz said in a memo to Starbucks employees. He pledged to hire 10,000 refugees over five years in the 75 countries where Starbucks does business to "reinforce our belief in our partners around the world."

Cook issued a letter, obtained by CNN, reacting to what he called "deep concerns" among employees. He assured workers that Apple does not support Trump's policy and the company is prepared to help them.

"Apple would not exist without immigration, let alone thrive and innovate the way we do," Cook said.

Google sent a memo to its employees urging anyone with a visa or green card from one of the banned countries to cancel travel plans.

"Please do not travel outside of the U.S. until the ban is lifted. While the entry restriction is currently only in place for 90 days, it could be extended with little or no warning," reads the memo, which was reviewed by CNN.

Microsoft said it employs 76 people that could be affected by the ban. Smith said in an email to employees, which was shared on LinkedIn, that it will provide "legal advice and assistance" to those affected.

Immelt said, in a memo on the G employee blog, that he shares the "concern" felt by his employees and said the company has many employees from the countries named in the ban.

"These employees and customers are critical to our success and they are our friends and partners," he wrote, adding that GE would "stand with them" and try to find a balance between security and "movement of law abiding people."

Immelt was one of 28 business leaders named to a council to advise Trump on manufacturing growth.

The bank said it has reached out to employees on sponsored visas who could be affected by the executive order. CEO Jamie Dimon is on Trump's business and economic council.

"We want everyone one of you to know of our unwavering commitment to the dedicated people working here at JPMorgan Chase," the statement said.

Trip Advisor's CEO wrote in a Linkedin post that Trump's immigration ban is "not only heartless and discriminatory, but also against the principles that make our country great."

Kaufer also said in a tweet that "We need to do more, not less, to help refugees," and said the action was "wrong on humanitarian grounds, legal grounds, and won't make us 'safer.'" In a separate tweet, he called out Republican lawmakers: "You can't sit this one out."

Afshar tweeted a list of U.S. tech companies that were founded by immigrants, including Apple, Google and IBM.

Graham said, "This is a good time to remember that without immigration the U.S. will only have 5% of the top people in each field."

Altman criticized Trump's move in a blog post. He called on tech executives to publicly speak out against Trump's executive order "at a minimum."

Weiner said "all ethnicities should have access to opportunity, calling it a "founding principle" of the United States.

Stoppelman called it a "sad day" for America.

"Shark Tank" star and tech investor Chris Sacca promised to match up to $50,000 worth of donations to the American Civil Liberties Union.

Levie also promised to donate to the ACLU and called Trump's actions "immoral."

Morin called it "one of the weakest decisions in American history."

Benioff retweeted anti-ban sentiments before posting his own thoughts.

Musk called the ban "not the best way to address the country's challenges."