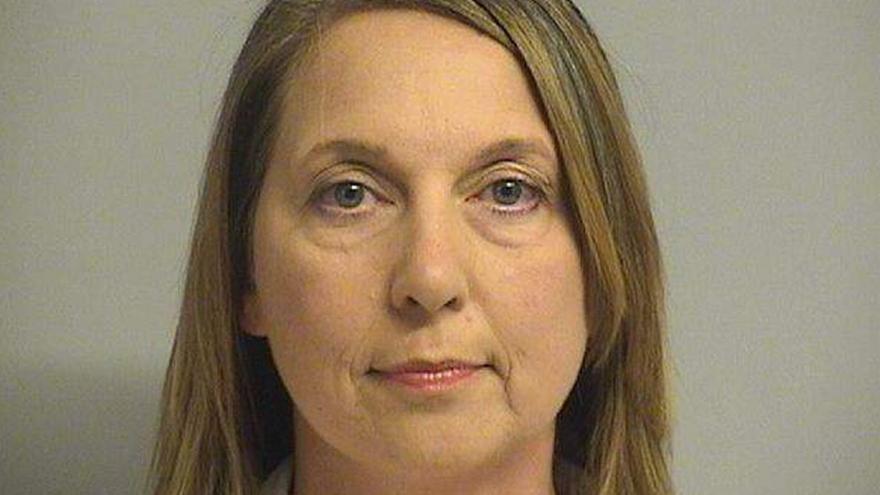 By Eric Levenson and Justin Gamble

The jury deliberated for nine hours before announcing its verdict. Juror #22, who was the foreman, was crying as the verdict was read.

Shortly after the ruling, a small group gathered to protest the verdict.

"You don't deserve to die because you're black," a young white woman yelled outside the court. "We need better training for police officers!"

Behind her, a group of people chanted "hands up don't shoot" as they walked down the streets.

Shelby, who is white, was charged last September with felony manslaughter in the shooting of Terence Crutcher, 40.

Police said Crutcher failed to obey commands, and Shelby testified she thought Crutcher was reaching for something in his SUV.

The fatal shooting, captured from several angles on video, was one of a number of police shootings of unarmed black men across the United States in recent years that have heightened concerns about possible police misconduct.

Shelby, who testified in her defense, said she shot Crutcher because he acted bizarrely and she feared for her life.

But prosecutors said in arrest filings that Shelby "reacted unreasonably by escalating the situation" into a fatal encounter. Crutcher was found to be unarmed after the shooting.

The jury began deliberating about noon. At one point Wednesday evening, the jury sent a note asking the judge whether it could explain its verdict in court. He called the jurors in and explained that members could not discuss in the courtroom the way the verdict was reached but could do so publicly after the trial concluded.

Shelby was arrested shortly after officials released videos of the shooting, which showed Crutcher walking on the road with his arms in the air before being shot.

The incident began when Crutcher's SUV was found abandoned in the middle of the street. A witness called 911 and said a man was running away from the vehicle, warning that it was going to blow up.

Shelby testified that she arrived on the scene and approached the vehicle and cleared it, not seeing anyone inside.

As she turned back to her patrol car, she saw Crutcher walking toward her, she testified. He alternated between putting his hands in his pockets and putting them in the air, according to Shelby.

Crutcher did not comply with her commands to "show me your hands," she testified. She also said he was sweating heavily and smelled of PCP chemicals.

Crutcher ignored orders from Shelby and another officer on the scene, Tyler Turnbough, according to Shelby's testimony. She testified that Crutcher put his hands on the SUV and moved to reach into the vehicle.

Her police training, she testified on Tuesday, taught her that "if a suspect reaches their hands inside of a car, don't let them pull them out."

"We're not trained to see what comes out of a car," Shelby testified. "We're trained to stop a threat, and by all indications, he was a threat."

At that point, Shelby fired her weapon and Turnbough fired his Taser, she testified.

Prosecutors asked Shelby on cross-examination why she, too, didn't use a Taser rather than a gun. Prosecutors also asked her where blame lay in the fatal encounter.

Family members and local pastors condemned the defense's arguments that they say made Crutcher into the villain.

For example, an autopsy found PCP in Crutcher's system at the time of his shooting, according to the toxicology report released by the Oklahoma Chief Medical Examiner's Office. The defense also brought up law enforcement experts who had encounters with Crutcher dating back to 1995.

On cross-examination, Shelby said she did not initially mention in her interrogation interview that Crutcher smelled like PCP chemicals. She said she had forgotten that detail at the time.

Marcus Howard, a family member and pastor of MyChurch Walk of Faith in Tulsa, also condemned those defense tactics.

"As a family member, we are very disturbed because it seems as though our family member has been put on trial," he said.

"Do you obviously believe Officer Shelby is a trigger-happy woman when she has never fired her gun before in over 11 years?" McMurray said.