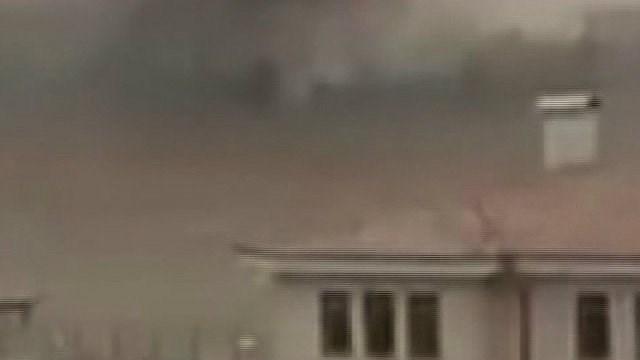 Attackers detonated a bomb-laden truck near the checkpoint in Cizre, Anadolu reported, citing the governor's officer in the province of Sirnak.

The armed wing of the the PKK -- a militant Kurdish group that's labeled a terror group by many in the international community -- took credit Friday for the attackt.

In an online statement, it promised to give more details Saturday on what it called a "comprehensive action took place to kill dozens of policemen by our brave team in Cizre."

"Turkey will never allow these terrorists to realize their dirty aims," Erdogan said in a statement. "There is no question that our fight with terror will succeed."

The PKK has clashed with Turkish police and military since a ceasefire ended in July 2015.

The attack comes as the Turkish regime battles not only the PKK, but also the Sunni Islamist terror group ISIS. Earlier this week, Turkish tanks entered northern Syria to help Syrian rebels clear ISIS from a border town.

Turkish officials announced Thursday they have detained 40 people in central and southern Turkey suspected of being affiliated with ISIS, which the country blames for an attack against a Kurdish wedding party last Saturday, Anadolu reported.

"Daesh should be completely cleansed from our borders, and we are ready to do that," Turkish Foreign Minister Mevlut Cavusoglu said Tuesday, using an Arabic acronym for ISIS.

The attack August 20, which killed 54 people, hit an outdoor wedding celebration in a conservative Kurdish neighborhood in the city of Gaziantep, near the Syrian border. In a year of bloody terrorist attacks in Turkey, the wedding bombing ranks among the worst, with the death toll surpassing the 44 killed in a June attack on the Ataturk Airport.

The Kurds have been a key ally of the United States in the war against ISIS in Syria and in Iraq . That has complicated the relationship with the Turkish government, which views the Kurdish YPG in Syria as an affiliate of the PKK.