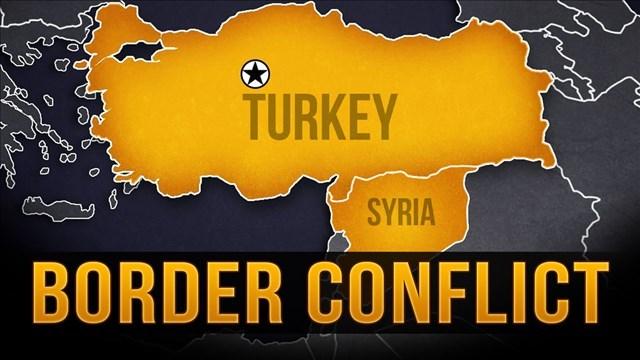 GAZIANTEP, Turkey (CNN) -- Turkey flexed its military muscle across the border in war-torn Syria this week by helping rebels retake the border town of Jarablus from ISIS, marking a decisive win for the Free Syrian Army.

On Saturday, the air force pounded more targets in the region. But in the bloody five-year-old conflict, replete with many power players and varying loyalties, it was unclear whether the latest airstrikes targeted ISIS or its other foes -- Syrian Kurdish fighters.

One Turkish soldier was killed in fighting on Saturday, and Turkish officials believe Kurdish fighters launched the rockets that killed him, according to Turkish sources and the state-run Anadolu Agency.

"The Turkish role here will be to protect the region," said Faheem Issa, who commands the Sultan Murad brigade -- a Syrian Turkmen unit. "Because of the world's indifference and insufficient backing for the Free Syrian Army, Turkey is providing that support."

Turkey launched airstrikes that injured civilians in Al Amarneh in eastern Jarablus, according to Manbij Military Council Cmdr. Shirvan Darwish. It struck areas to the south of the town, destroying an ammunition dump and the headquarters of a "terror organization," according to military sources speaking to Anadolu.

And, a spokesman for a Turkish-backed Free Syrian Army group called the Sultan Murad Brigade said its fighters have seized a series of villages to the west of Jarablus. The villages -- Tal Shair, Hamir al-Ajaaj, and al-Helwaniah -- are near a key border crossing, Bab al-Salama, but it is unclear from whom they were seized.

In comments televised by CNN Turk, Turkish Deputy Prime Minister Numan Kurtulmus referred to Turkey's fight against "terrorist groups operating in Marea-Jarablus line," an area running along the border between Bab al-Salama and the town of Jarablus. That suggests Turkey aims to control a long stretch of the border as part of Operation Euphrates Shield.

"We will cleanse the area from ISIS and other terrorist groups. The swift and result-oriented operation continues successfully. We are in coordination with international organizations. We use our right of self defense that international law gives us."

Turkey views both ISIS and Kurdish rebels as foes and its allegiances have complicated its relationship with the United States.

Kurdish fighters have been a key ally of the United States in the war against ISIS in Syria and Iraq, but the Turkish government views those fighters -- the People's Protection Units in Syria, also known as the YPG -- as an affiliate of the Kurdistan Workers' Party, a pro-separatist group that Turkey has been fighting for years.

The YPG is believed to have fired rockets at two Turkish tanks six or seven kilometers south of Jarablus as Turkish-backed rebels were advancing south, Anadolu said.

Along with the one soldier killed, three others were injured. The death was the first in the fourth day of Operation Euphrates Shield.

A military source says it was 99.9 % certain that "YPG that launched the rockets. Two Turkish tanks hit. One soldier injured in one of them. Two injured and one killed in the other."

Getting back to normal

In Jarablus on Saturday, shops were being restocked, street life appeared to be getting back to normal, and the Red Crescent was seen distributing aid.

That comes after the Free Syrian Army rebels drove ISIS out of that city in a key military victory on Friday. The FSA took control of the town in less than 24 hours with the help of Turkey's potent and huge military -- the second-largest in NATO after the United States.

"For now, our focus is on ISIS," said Issa, the commander of the Sultan Murad brigade.

At the same time, he doesn't deny that his fighters have battled US-backed Kurdish militias, which, Turkey insists, must withdraw east of the Euphrates River.

The United States has spent millions of dollars arming and training Syrian rebels, with little to show for it. In contrast, American officials regard Kurdish fighters as far more effective in fighting ISIS.

US aircraft did strike ISIS targets during the push on Jarablus, but the boots on the ground are Turkish. Turkish involvement, not American support, helped provide these Syrian fighters with a rare victory.

Officials said one of the goals of this operation is to set up a "terror-free" zone -- in effect a buffer zone -- to ensure the safety of Turkish citizens living along the border.

"We came to rid this area of ISIS," Issa said.