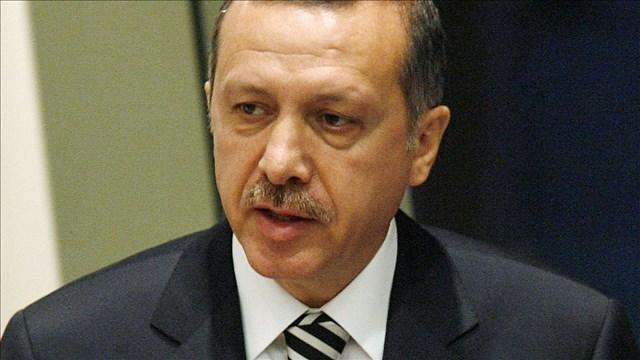 (CNN) -- Turkish President Recep Tayyip Erdogan called for an overhaul of the United Nations on Monday, saying its Security Council had failed to address the Syria conflict and other global challenges.

Erdogan gave an unabashed speech in Istanbul at the closing of a NATO meeting, where he slammed the Security Council's concentration of power, reiterating that "the world is bigger than five."

"There have been numerous positive steps taken, however, the United Nations failed to act effectively facing a number of issues, Syria included," Erdogan said.

The Security Council, responsible for international peace and security issues, includes five permanent member states -- the United States, China, France, Russia and the United Kingdom -- which all hold the power to veto decisions or resolutions.

The Council has been widely criticized as ineffective over its inaction on the war, failing to push through decisions on the conflict since it broke out with the Arab Spring in 2011.

That's because Russia -- an ally to Syrian President Bashar al-Assad's government -- has used its veto power five times regarding the conflict, while China vetoed four of the five.

It took three years before any decisive international intervention, beginning with US-led airstrikes in 2014.

"To achieve international peace and security, it's going to be very difficult, and perhaps fail if the United Nations is not restructured," he said.

"The United Nations was formed at the end of World War II and we cannot continue to manage this world with an organization that old."

Erdogan also took the opportunity to call on world powers to stop supporting "terrorist organizations," including the Kurdish People's Protection Unit (YPG). The US calls the YPG a "moderate rebel group" and has given it military support and arms through the Syrian Democratic Forces alliance fighting ISIS militants.

"Some say ... we do not recognize the YPG as a terrorist organization because they fight against Daesh," Erdogan said, using the Arabic acronym for ISIS.

He pointed out that Jabhat Fatah al-Sham, the militant group formerly known as Jabat Al-Nusra, was also fighting ISIS and was internationally considered a terrorist organization.

"They fight against Daesh. Just because a terrorist fights another terrorist, can you call them a good terrorist? At least that's what we are seeing in Syria and Iraq," he said.

He also called on the world to help implement a no-fly zone in Syria, a policy that US Democratic presidential candidate Hillary Clinton suggested during the election campaign. But the idea has been met with little enthusiasm in Washington, where it has been mulled for years.

"But despite saying yes to us, (the no-fly zone) has been left just sitting there without action. And it is my wish from now on, headed by the United States, that these steps now can be taken. And we can strike a blow to terrorist organizations, and the dangers in Turkey can be eliminated," he said.

Erdogan also used the opportunity to criticize Europe's response to the refugee crisis, complaining that the burden had fallen heavily on Turkey's shoulders and that the Turkish people were not given enough in return.

"As you know, since the beginning of the crisis in Syria, Turkey has taken its place at the frontline. And Turkey has never turned shy from its humanitarian duties. Turkey has opened its doors to over 3 million Syrians, and unfortunately all the promises of support made to Turkey have remained just that -- promises, and only a small fraction of those premises have materialized," he said.

In March the European Union reached a deal with Ankara, in which Turkey would essentially prevent migrants from leaving its coast for EU states, or would accept migrants sent back from EU countries for registration there.

In return, Turkey was to receive significant financial aid and its push to join the union was to be expedited.

Erdogan was speaking on the final day of the 62nd annual session of the NATO Parliamentary Assembly, where the Syrian conflict and Europe's refugee crisis featured heavily in talks.

NATO -- the North Atlantic Treaty Organization -- is a 28-member group that deals with security issues in the Atlantic and couples the United States with its European allies.

US President-elect Donald Trump during his election campaign questioned Washington's commitment to NATO, as he expressed interest in bringing the US closer to Russia. Moscow has reiterated it is not a regional security threat and accuses NATO of provoking regional tensions.