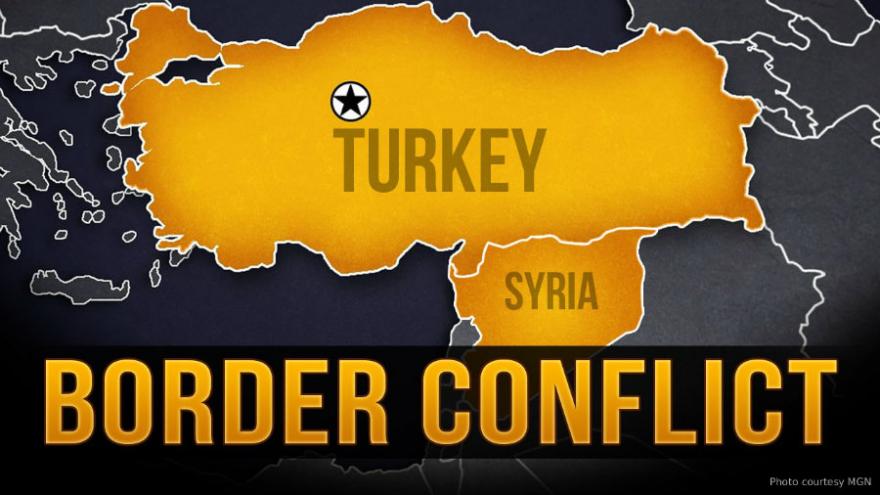 (CNN) -- Turkey launched a ground operation across the border into northern Syria on Sunday, in a move likely to raise tensions with the United States.

Turkish officials said the troops entered the Afrin region a day after Turkish jets pounded targets there in an attempt to drive US-allied Kurdish militia from the area.

"Operation Olive Branch is ongoing as planned and the ground operation has started," the Turkish armed forces said in a statement.

The military incursion is likely to raise tensions between Turkey and the United States, which supports and openly arms Kurdish militias fighting ISIS.

The land operation comes as rockets from Syria also hit the Turkish border city of Kilis on Sunday, according to Turkish state-run Anadolu Agency.

One person was injured and buildings damaged in the attack, said local governor, Mehmet Tekinarslan.

It was not immediately clear who fired the rockets, though they come hot on the heels of Turkish airstrikes on areas under the control of the People's Protection Units, also known as the YPG.

Turkey said it launched what it dubbed Operation Olive Branch on Saturday to target "terrorist organizations" including YPG forces.

Turkey has long fought Kurdish unrest in the southeastern part of the country. It's determined to prevent the establishment of a Kurdish state across the border in Syria and has used military force in the past against Kurds and ISIS in the northern part of the neighboring country.

The Turkish military said its air force destroyed 108 targets in seven regions during the operation, including weapons depots and barracks belonging to Kurdish militias and ISIS.

The YPG issued a statement on a pro-PKK news outlet, ANF, calling the Turkish attack "barbaric."

"We have no choice but to resist," the YPG statement said. "We call upon all of our young people to meet in the ranks of resistance, taking the resistance spirit of our sacrificial martyrs as an example."

Washington had previously called on Ankara to refrain from launching a military incursion in Syria. "The focus needs to be on ISIS," State Department spokeswoman Heather Nauert said last week.

Turkish forces have said they are targeting ISIS as well as Kurdish militia in Afrin.

"The operation is being carried out within the right of self-defense and with respect to Syrian territorial integrity," the Turkish armed forces said in a statement.

The incursion is likely to further stoke tensions between Turkey and the US after the announcement of a US-backed border force in Manbij, northern Syria, last week.

A 30,000-strong, US-trained border force from the Syrian Democratic Forces, dominated by YPG fighters, is to be trained in Manbij. Turkish-backed rebels and US forces have been trading fire there, US defense officials said.

The SDF is made up of a number of local rebel groups but mainly from Kurdish militia of the YPG.

The announcement of a border force infuriated Turkey's leaders, and Erdogan has accused the United States, its most powerful NATO ally, of "building an army of terror" on his border and threatened to "drown" the US-backed force. Turkey regards the YPG as the Syrian arm of the Kurdistan Workers' Party, or PKK, despite the group's help in battling ISIS.