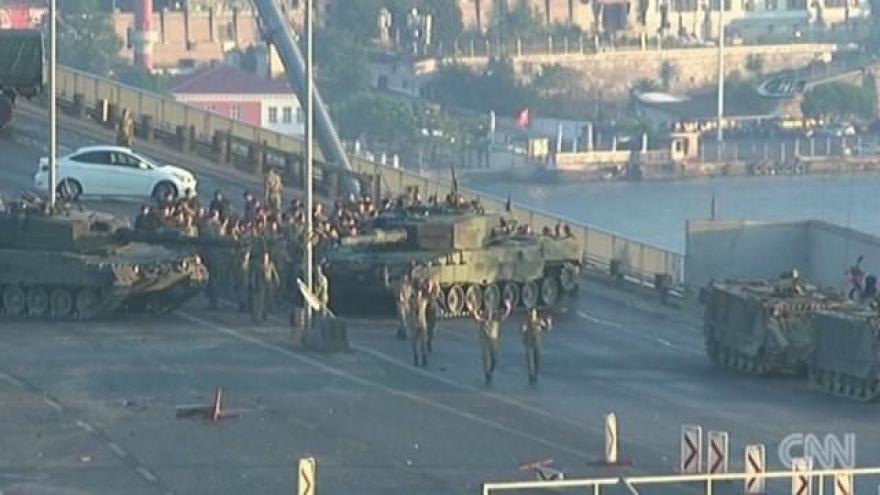 (CNN) -- "Something strange is happening in Turkey."

That was the ominous text message received by a senior officer in the Turkish military as he ate dinner with friends on a Friday night in July.

The middle-aged officer, posted abroad in Europe, wasn't initially alarmed. He continued his dinner. But when he began to search online, he discovered an attempted coup was taking place.

"There was chaos. There was disorder. No one knew what was happening in Turkey," he said, recalling scenes of tanks on the Bosporus Bridge.

Within hours, Turkey's president Recep Tayyip Erdogan would appear on CNN Turk via Apple FaceTime from his vacation on the Mediterranean urging his supporters out onto the streets. By morning, the coup plotters had been subdued.

Within weeks, the officer -- along with hundreds more -- would also be out of a job.

He maintains he had nothing to do with the attempted coup, and has asked CNN to conceal his identity and location out of fear of reprisals on family and those he knows still in Turkey.

"I condemn the coup," he said in an interview with CNN.

"I don't think that any coup, regardless of the intention or the objective, could be acceptable."

But he's concerned that the aftermath transformed Turkey, leaving the military dangerously understaffed, impacting the stability of the NATO alliance, and entrenching an authoritarian leader.

Purged from the military

Ordered to return to Turkey following the attempted coup, the officer refused out of concern for his safety.

The first group of his colleagues to report home found themselves targeted.

"As soon as they arrived in the country, ninety percent of the initial group who decided to go back were ... imprisoned."

When he sought more information about the complaints against him, he says, he was told they were a "state secret."

A number of Turkish officers stationed in Europe have applied for asylum in the countries where they were based, according to some of them who've spoken to CNN.

The officer says he eventually received a letter from the Turkish military saying he had been dismissed "due to an administrative decision."

CNN requests for comment from the Turkish government, on both specific allegations and a general response, have gone unanswered.

Turkey's foreign minister, Mevlüt Çavusoglu, defended the government's actions in an interview with CNN's Christiane Amanpour in September. He said that the government had a responsibility to forestall another coup by arresting those involved in the attempt and suspending those who supported it.

But, he added, mistakes could be made.

"Our obligation is actually to take necessary measures that innocent people shouldn't be affected or punished or purged."

Turkey's transformation since the coup attempt last year is in little dispute. Erdogan said recently that 43,000 people have been arrested and 95,000 fired from state posts. The government has also repeatedly renewed the state of emergency imposed following the attempted coup. And in January, parliament approved a range of new amendments to the constitution that would hand more power to the president enabling him to stay in power until 2029.

Meanwhile, the military has stepped up attacks on Kurdish separatists in Turkey and Syrian Kurds across the border -- the latter an American ally in the fight against ISIS.

Turkey, a NATO member, has been beset by crises, including terrorist attacks at home and complex wars in Syria and Iraq. Its stability is a matter of concern for NATO, as it provides a crucial bulwark for Europe against flashpoints in the Middle East.

That bulwark, the exiled officer said, is being severely tested as Erdogan's purges weaken the country's military capacity. Hundreds of pilots have been sacked, he said.

"The capacity for the Turkish air force has collapsed," he told Shubert. "That's a nightmare for a country which relies on strong air force to defend a large airspace, on top of a geography where you never know how your neighbors could behave from day to day."

"To be very blunt over here, (the) Turkish military ... have lost their war-fighting capability to a great extent."

NATO's supreme allied commander in Europe, General Curtis Scaparrotti, said in December that he never had any reason to suspect that Turkish officers in his teams would be involved in a coup attempt. In their absence, and without their expertise, the capacity of his staff had been "degraded," he told the Financial Times and Deutsche Welle.

The Turkish officer said a "common denominator" for everyone targeted in the purges was that they were at least partially educated in the West.

"It's very normal. It's not surprising for anybody in Europe or in Turkey or in NATO to see that the best Turkish officers had their education in the States or in Europe."

Rule of law, he said, can hardly be considered a "Western value."

The Turkish government blames the coup on Fethullah Gulen, a reclusive cleric and former Erdogan ally, who has been in exile in the US for nearly two decades. Gulen vigorously denies any direct involvement, although he concedes that people sympathetic to his cause may have been involved.

The officer did not directly answer a question about whether he was a Gulenist himself, instead saying that by the Turkish government's definition, anyone from Donald Trump to Pope Francis could be accused of supporting Gulen.

"If you had any kind of affiliation with these supporters then you are a terrorist," he said.

Removed from the military and in exile, the officer is faced with building a new life.

"I was a senior Turkish military official, with high credentials, with a good reputation," he said.

"Your reputation among your peers; your dreams for yourself, for your family, for your colleagues...they all collapsed at a single moment."

But he remains cautiously hopeful about the future of his country.

"I think in the long term, our nation -- the wisdom, the historical wisdom of our nation -- would not allow this decline to turn out to be a collapse."