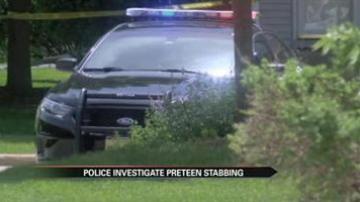 Police are still investigating a stabbing that seriously injured a 12-year-old girl in Wisconsin.

Police in Waukesha, Wisconsin, near Milwaukee, say two 12-year-old girls held the victim down and then stabbed her 19 times in her arm, legs, and torso.

The girl managed to crawl out of the wooded area where she was stabbed, where a bicyclist found her.

Police say the suspects had an obsession with an online horror and death website.

"I hesitate to put the one character out there, because that's all parents will look for, I want to stress today that parents shouldn't be allowing their children to have unrestricted or unmonitored internet usage. Be it on their smart phone, Play Station, all of those access the outside world," said Waukesha Police Chief Russell Jack.

The 12-year-old victim is still in the hospital but in stable condition.

Police have arrested two girls in connection with the stabbing.