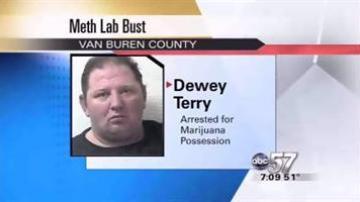 Officers arrested 42-year-old Dewey Terry and an unidentified woman at the home on 56th Avenue in Paw Paw Township.

Police said they got a tip about drugs in the home.

Officers told us they found meth, an active lab, marijuana, a rifle and lots of drug paraphernalia.

Both Terry and the woman face several drug charges.