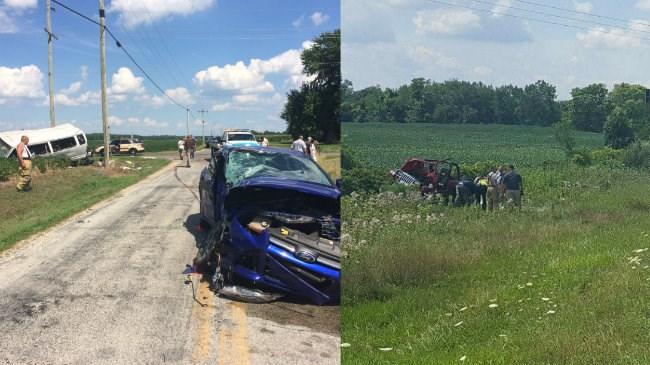 At approximately 1:21 p.m., Kosciusko County Sheriff’s Deputies responded to an overturned vehicle at the intersection of U.S. 30 and County Road 200 West.

When responders arrived, they found 34-year-old Dustin Cullen of Bremen pinned underneath a red 1993 Jeep Wrangler.

Officials say Cullen was traveling eastbound on U.S. 30 when he approached slower traffic and suddenly swerved to avoid hitting the vehicle in front of him.

Cullen then lost control of his vehicle and it began to roll down an embankment area.

Deputies say attempts to perform CPR on Cullen were unsuccessful. Cullen was pronounced deceased on the scene.

The second crash was reported around 2:56 p.m. at the intersection of County Road 700 North and County Road 200 East near Leesburg.

Two of the victims 34-year-old Benito Lozano and 18-year-old Josh Loetz, were immediately airlifted from the scene in critical condition.

Quinn then attempted to pass a slower vehicle in front of him in a no passing zone.

Police say Lozano attempted to cross the intersection, traveling northbound on County Road 200 when Quinn’s van struck the passenger side of Lozano’s vehicle.

The other three passengers involved in the crash were taken to Kosciusko Community Hospital for non-life threatening injuries.

Deputies say both of the crashes are still under investigation at this time.