Two fatalities in two days due to winter weather 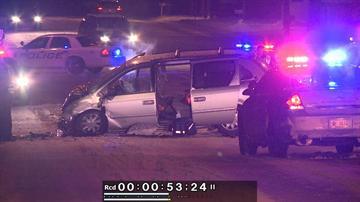 ST. JOSEPH COUNTY, Ind. -- This winter weather is becoming quite a safety hazard for foks in Michiana. There have been two fatalities in two days.

Just before one p.m., a car lost control on a snowy road and forty-six-year-old Linda Ward of Culver died from the crash.

Last night, just before 11 p.m., a Pontiac Sedan was speeding and slid on an ice patch on Cleveland Road and crashed into a mini-van.

The driver of the sedan, 40-year-old Christopher Perkins of Mishawaka, died.  The couple in the minivan, who are in their seventies, were rushed to Memorial Hospital.

76-year-old Andrew Zawisza of Granger has been released from the hospital and his wife, 74-year-old Terry Zawisza is still in the hospital in fair condition.  Her daughter told me she has broken ribs and is having some lung issues, but is expected to make a full recovery.
Her daughter also told me she hopes this accident can be a lesson to everyone to slow down with these wintery road conditions.

Sadly that speed and weather induced crash didn't turn out well for the driver, who had to be extricated from the vehicle or the victims in the mini-van.

"The driver who caused the accident did not survive," said Blank.

"There was an elderly couple in the mini-van they were transported to Memorial Hospital," said Blank.

Last night officers thought the only contributing factors to this crash were speed and slick roads, but police sent out a press release saying they believe the driver was under the influence of alcohol.