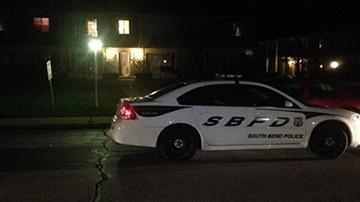 SOUTH BEND, Ind. — There were two home invasions in South Bend early Wednesday morning. The suspects took victims from the first home invasion to the second home invasion a few miles away.

South Bend Police responded to a home invasion at Park Jefferson Apartments at around 4 a.m. Wednesday.

According to police, three males reportedly armed with weapons broke into an upstairs apartment.

Inside the home were two adults, three juveniles and one infant.

The men did not find what they were looking for and then took a woman and the infant to a home in the 1600 block of South Nash Street, resulting in another home invasion.

One of the suspects remained at the Park Jefferson apartment.

The woman and child were later released at the Nash Street home.

"We do know the victim's vehicle, a purple Chevy Equinox, has been used for their escape and we believe that they've departed and are not interested in being anywhere near here any longer obviously," said Captain Phil Trent of the South Bend Police Department.

If you have any information on this crime, contact the South Bend Police Department.