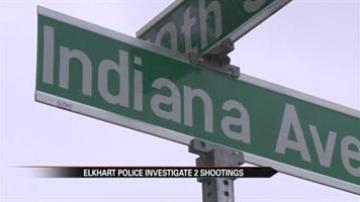 Police said neither victim is cooperating with authorities and no suspects are in custody.

Police said both victims walked into the hospital with gunshot wounds, and at this time they don't believe the two incidents are related.

Neighbors said there have been several shootings this summer at Washington Gardens but no one who lives there wants to talk to police.

Junior Floyd said, “It ain’t just Elkhart it’s all over. it’s ridiculous. Nobody can catch nobody.”

Elkhart Police are asking the public for help with any information they have regarding both these shootings.