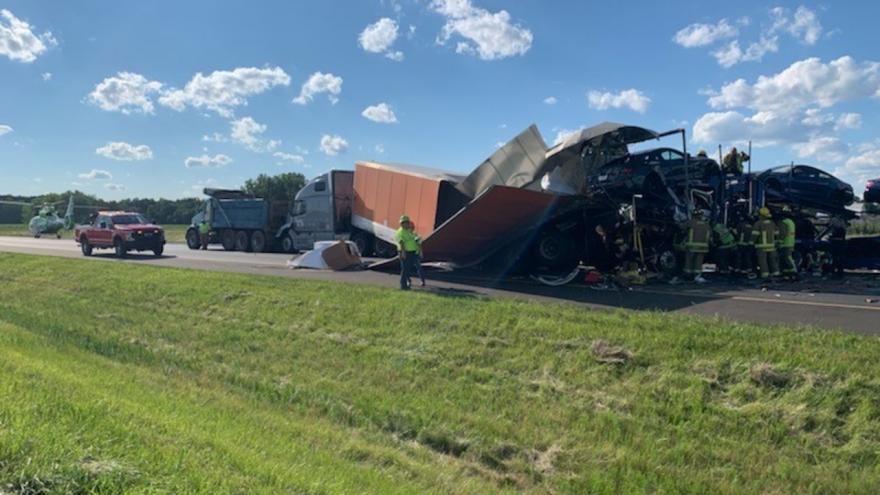 When troopers arrived on scene, they found three commercial vehicles piled up and blocking the westbound lanes of travel.

A preliminary investigation found that at the time of the crash, both westbound lanes were backed up and stopped due to road construction at the 118 mile marker.

For an unknown reason, the driver of a 2020 Peterbilt semi-tractor pulling a loaded car hauler failed to recognize the stopped traffic ahead and crashed into the back of a 2014 Volvo semi-tractor/trailer, police said.

This impact caused the Volvo to crash into the back of a 2005 Kenworth dump truck that was also stopped in traffic.

The driver of the Peterbilt was trapped in the semi-tractor for a period of time. Due to the nature of the crash, the damaged vehicles had to be separated in order to get the driver out from the cab of the truck.

The driver of the Peterbilt was flown to a Fort Wayne hospital and the extent of his injuries is unknown.

The driver of the Volvo sustained minor injuries in the crash. He was taken to a LaGrange hospital where he was treated and released.

The driver of the Kenworth dump truck was not injured in the crash.

The westbound lanes were shut down for nearly four and a half hours while crews worked to clear the scene.

The exact reason for this crash is still unknown but Indiana State Police urges drivers to slow down and pay attention in and around construction zones.