Two killed in fire at body shop in Milford 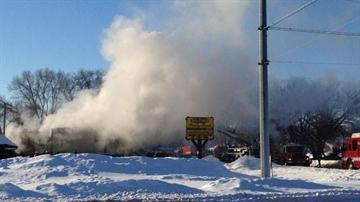 Kosciusko County Dispatch said the fire was at Medina's Body Repair in the 300 block of North Higbee Street.

The call came in just after 7 a.m.

Firefighters said the blaze was so intense, they weren't able to get inside and save the two people trapped upstairs.

Both died in the fire.

"It was very difficult to get it under control. They tried," said Michael Wilson, Kosciusko County Coroner.

Wilson said the two victims were living above the body shop and it is unclear if there were any smoke detectors.

"Smoke detectors and carbon monoxide detectors should be in every home - every sleeping area - outside all of the sleeping areas and scattered throughout the structure," said Wilson.

The structure burned for almost four hours before crews got it under control.

Investigators say a number of explosive chemicals were inside the building.

"Body shops by nature, it's a business that has a lot of chemicals in it - thinners, paints and a lot of things that are flammable," said Rich Miotto, Milford Town Marshal.

Firefighters from five departments were called to the scene.

Emergency responds are asking everyone to test their smoke detectors and carbon monoxide detectors.

"It's not mandated, but it's highly recommended," said Wilson.

Three fires in the last week have claimed the lives of seven people.