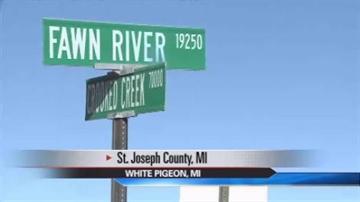 The Undersheriff of the Saint Joseph Sheriff’s Department says overnight rain made the roads appear wet, but it was actually black ice. The Undersheriff says that was the likely cause of the accident.

The driver of the car was identified as 30-year-old Kirk Miller of Keystone, Indiana.

The accident happened on Fawn River Road in White Pigeon.

Miller was driving six people to work when he lost control and rolled his vehicle into the trees.

“He was driving six passengers who were Amish to a work site in Three Rivers--Menards where they are currently doing work for the construction of Menards in the Three Rivers area,” said Mary Lillywhite, Undersheriff, St. Joseph County.

Miller was not injured in the accident.

Two passengers were pronounced dead at the scene.

Emergency crews flew one of those Amish passengers to Bronson Hospital.

Police say the names of the victims will likely be released Thursday morning.