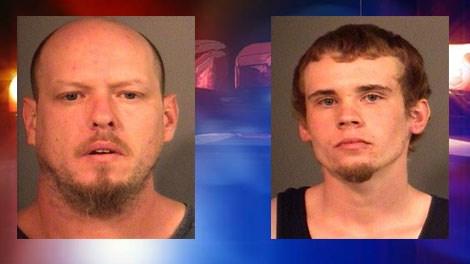 Two men have been charged with criminal recklessness for allegedly shooting guns at the wall of a garage at a home on Columbia Street in Mishawaka.

Mishawaka Police were called to the area of 4th and Columbia streets in Mishawaka around 3:40 a.m. March 17.

When police arrived to the area, they heard gunshots coming from the back yard of a home on Columbia Street.

An officer could see at least one person firing a gun in a garage.

Officers detained the two people in the garage, who were identified as Shaun Davis Sr and Brandon Wright.

One of the men had a handgun and the other had a rifle, police said.

Officers said they saw bullet holes in the walls of the garage.

Police said Davis and Wright both admitted they were firing guns in the garage, reports said.

Officers checked outside the garage and located bullet holes in a trash can and in a neighbor's house.

Wright and Davis were arrested and charged with criminal recklessness.

Wright is a convicted felon and is on probation or parole in Michigan, the probable cause affidavit said.