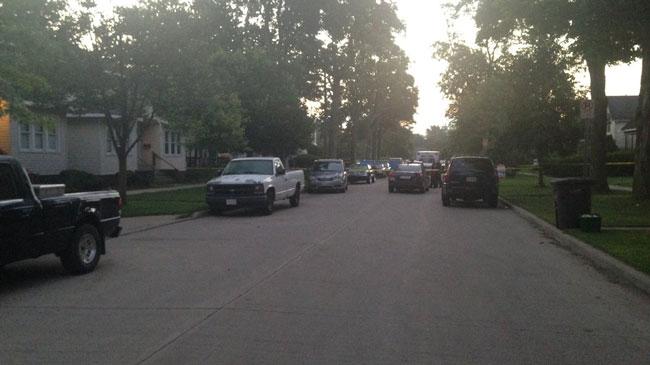 Police were at a home on Strong Avenue investigating a triple homicide when several people gathered in the area just outside the crime scene.

Police warned bystanders not to cross the crime scene tape or they would be arrested. A short time later, police said Dylan Baldwin, 22, lifted the police tape and entered the crime scene.

Baldwin was pushed outside of the crime scene and other bystanders attempted to pull him from the officer.

Officers gained control of the scene and Baldwin was taken into custody on a preliminary charge of interfering with law enforcement.

Another man was allegedly yelling at officers and inciting others to do the same.

Police told Daryle Goodman, 28, to keep his voice down and stay back from the scene, according to reports.

Goodman allegedly continued yelling and took a fighting stance. Police ordered him to put his hands behind his back, but did not.

Police used a chemical irritant, then used a taser to get Goodman under control, police said.

Goodman was decontaminated, then taken into custody for disorderly conduct.

Shortly after 11:00 pm, Sunday night, July 31, 2016, officers of the Elkhart Police Department responded to an emergency call reporting a shooting death in the 600 block of Strong Avenue, Elkhart. Upon arrival, officers found three deceased men and immediately began establishing a crime scene to preserve any evidence that may be useful in the investigation into the deaths. While officers were attempting to interview witnesses and seek search warrants for the premises, numerous individuals began challenging the authority of police protecting the scene. Additional resources had to be dispatched to address the disturbances the crowd was creating so that Detectives could proceed with the investigation. Two people were arrested for interfering with the police investigation after breaking through the police established barriers.

The Elkhart Police Department and the Office of the Prosecuting Attorney respect the emotional impact that traumatic violence has on the victims' family and friends, and our community, and encourages widespread support for all who are grieving from the deaths of the victims of this crime. However, if police officials are distracted from pursing an objective and thorough investigation into the circumstances of these senseless acts, and identity of the perpetrator, accountability under the laws of our state could be compromised.
Unless and until a complete investigation has been conducted, addressing all possible suspects, motives, and the circumstances surrounding the deaths of these men, objective justice cannot be served. Premature public conclusions based upon misinformation, rumors, speculation, and/or bias will not only fail to bring justice to the families and friends, but will cause further harm to our community.

The Police need to be free from distractions in securing and protecting a crime scene, and conducting their investigation. The Office of the Prosecuting Attorney will support the Police in taking whatever steps are necessary to carry out these critical functions so that evidence and information is not tainted and can be evaluated according to the law. Anyone who defies their authority in protecting a crime scene, preserving evidence, and managing the investigation should expect that the Office of the Prosecuting Attorney will hold them accountable for actions that disrupt this process.

Witnesses that may have any information regarding the victims of these murders, or the circumstances of the crime, should contact the Elkhart Police Department.