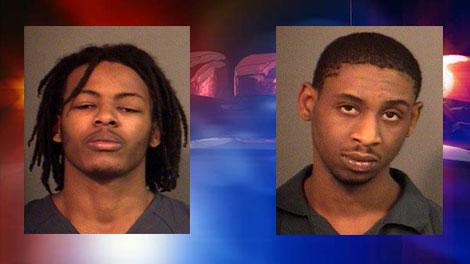 Two men are facing charges related to an armed robbery that happened on February 12 in South Bend.

According to the probable cause affidavit, the victim told police he was at the Munchie Mart on Western Avenue in South Bend when two armed men got into his vehicle.

The victim said Fulce put a gun to his head and told him to drive to West Sunset Place and park.

Once parked, the victim said Fulce demanded all of his belongings. The victim handed over his wallet and money.

A white vehicle pulled up and the suspects got out of the victim's vehicle and got into the white vehicle, according to the probable cause affidavit.

The victim got a partial license plate number from the white vehicle, police said.

Officers located the white vehicle in the area of N. Chicago Street and conducted a traffic stop.

According to the probable cause affidavit, Fulce exited the driver's side of the vehicle and dropped a gun in the snow under the vehicle.

The victim identified both Fulce and Dotson as the men who robbed him.

Fulce was arrested and charged with armed robbery.

Dotson was charged with robbery resulting in bodily injury.