Two Michiana names among those on Holcomb's transition board 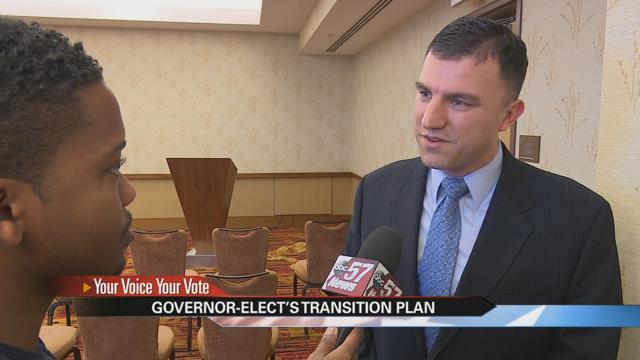 Two notable names from the Michiana area are on Governor-elect Eric Holcomb’s transition board.

Blair Milo, the mayor of La Porte, and Rudy Yakym III, a Republican delegate and vice president of Bradley Company in South Bend, joined Holcomb at a press conference Wednesday afternoon in Indianapolis.

“It really is an honor and a privilege to be asked to represent northwest Indiana as [Holcomb] crafts all of that policy and really continues to move Indiana forward,” Yakym said.

Holcomb announced his transition board the day after winning the gubernatorial race over Democratic challenger John Gregg.

“He wanted some geographic diversity,” Yakym said, referring to the transition board. “He didn’t want it to be just an Indianapolis-centric group. He wanted to reach out to people across the state and invite them to participate in this transition process.”

Yakym and Milo will round out Holcomb’s advisory team while he transitions from lieutenant governor into the state’s main role.

Yakym and Milo will represent Michiana as the Holcomb-Crouch team takes on the state’s major responsibilities.

“The perspective that north central Indiana is indeed a part of Indiana, and that we aren’t a portion of Indiana that’s to be forgotten about when we’re doing things like moving through the legislative cycle in Indianapolis,” Yakym said.

The transition board will gather for their next planning meeting on November 21.